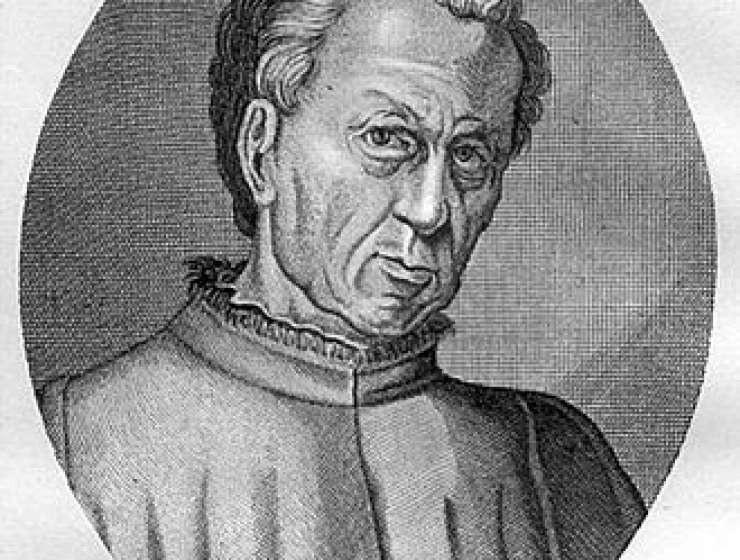 Poggio Bracciolini, an Italian Renaissance humanist, was born Feb. 11, 1380, in the town of Terranuova, about 20 miles southeast of Florence. Humanists were the people most responsible for discovering the manuscripts of ancient texts and putting the “rebirth” in Renaissance, and Bracciolini was better than most at finding long-lost treasures in monastic libraries. In 1415, he discovered the only surviving manuscript of Vitruvius’ Ten Books of Architecture, indeed the only surviving manuscript of any ancient work on Greek and Roman architecture, which became the textual basis for Renaissance architecture. In 1416 or 1417, he discovered in Switzerland a manuscript of an astronomical poem by a Roman writer, Marcus Manilius, who was totally unknown in the West until Bracciolini turned him up.  Somewhat later, in 1429, he found a manuscript of Firmicus Maternus’ Mathesis liber, a Roman treatise on astrology. And he found a host of letters, orations, and treatises by the likes of Cicero and Quintilian that we must pass by here.

Most famously, Bracciolini found a copy of Lucretius’ philosophical poem, De rerum natura, in a German monastery in 1417. This is our principal source for ancient atomism, and the copy Bracciolini discovered and copied, and then fortunately had copied again, is still the only complete copy we have (we say fortunately, because the original in the monastery has disappeared, along with the copy Bracciolini made, but the second copy made by Niccolò Niccoli is still extant). Stephen Greenblatt published a book ten years ago on Bracciolini’s recovery of Lucretius; the book was called The Swerve: How the World Became Modern (2011), and amazingly, it made the New York times non-fiction best-seller list for some weeks running, so perhaps you own a copy, and maybe now is the time to open it.  It is very good on Bracciolini and Renaissance manuscript recovery, but, in my opinion, runs off the rails after that.

Story Continues
lindahall.org
What Do You Think Of That Genius?