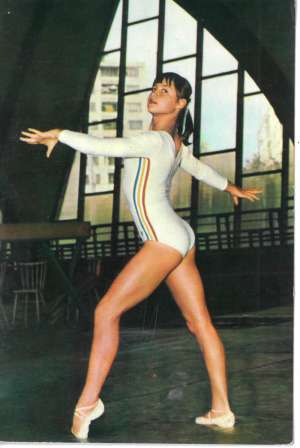 Nadia Comăneci is a retired Romanian gymnast who is widely regarded as one of the greatest gymnasts in the history of the sport. She burst onto the international scene at the 1976 Summer Olympics in Montreal, where she became the first gymnast in history to receive a perfect score of 10.0 in an Olympic competition. Comăneci went on to win a total of five Olympic medals, including three golds, and was inducted into the International Gymnastics Hall of Fame in 1993.

Born in 1961 in Onesti, Romania, Comăneci began training in gymnastics at the age of 6. She quickly showed a natural talent for the sport, and by the age of 9 she was competing at the national level. In 1975, at the age of 14, Comăneci won her first national all-around title, and the following year she made her international debut at the European Championships.

Comăneci's breakthrough performance came at the 1976 Summer Olympics in Montreal, where she became the first gymnast to receive a perfect score of 10.0 in an Olympic competition. Comăneci received a total of seven perfect 10s at the 1976 Olympics, and she won gold medals in the all-around, the balance beam, and the uneven bars. She also won a silver medal in the team event and a bronze medal in the floor exercise.

After the 1976 Olympics, Comăneci continued to compete at the international level and won numerous titles, including three more gold medals at the 1979 World Championships. She retired from competitive gymnastics in 1984, but her legacy in the sport has lived on.

Comăneci's perfect scores and impressive performances at the 1976 Olympics made her a household name and a symbol of the power of hard work and determination. She helped to popularize gymnastics and inspire a new generation of young athletes, and she remains one of the most recognized and respected gymnasts in the world.

After her retirement from competitive gymnastics, Comăneci has remained active in the sport as a coach and commentator. She has also been involved in a number of charitable causes, including work to promote the rights of children and improve access to education.

Comăneci's impact on the world of gymnastics has been immense, and she is widely considered one of the greatest gymnasts of all time. Her perfect scores and impressive performances at the 1976 Olympics will always be remembered as a defining moment in the history of the sport, and her legacy will continue to inspire athletes and fans around the world for years to come.

In addition to her success in gymnastics, Comăneci has also made a name for herself as a successful businesswoman and author. After retiring from competitive gymnastics, Comăneci co-founded a gymnastics academy in Oklahoma and has worked as a coach and commentator for various television networks.

Comăneci's contributions to the world of gymnastics have been recognized with numerous awards and honors. In addition to being inducted into the International Gymnastics Hall of Fame, she has also been honored with the Order of the Star of Romania, the highest state decoration in her home country. She has also been awarded the Presidential Medal of Freedom, the highest civilian honor in the United States, and the Olympic Order, the highest honor of the Olympic movement.

Throughout her career, Comăneci has inspired athletes and fans around the world with her talent, determination, and graciousness. She will always be remembered as one of the greatest gymnasts in the history of the sport, and her legacy will continue to inspire future generations of athletes.