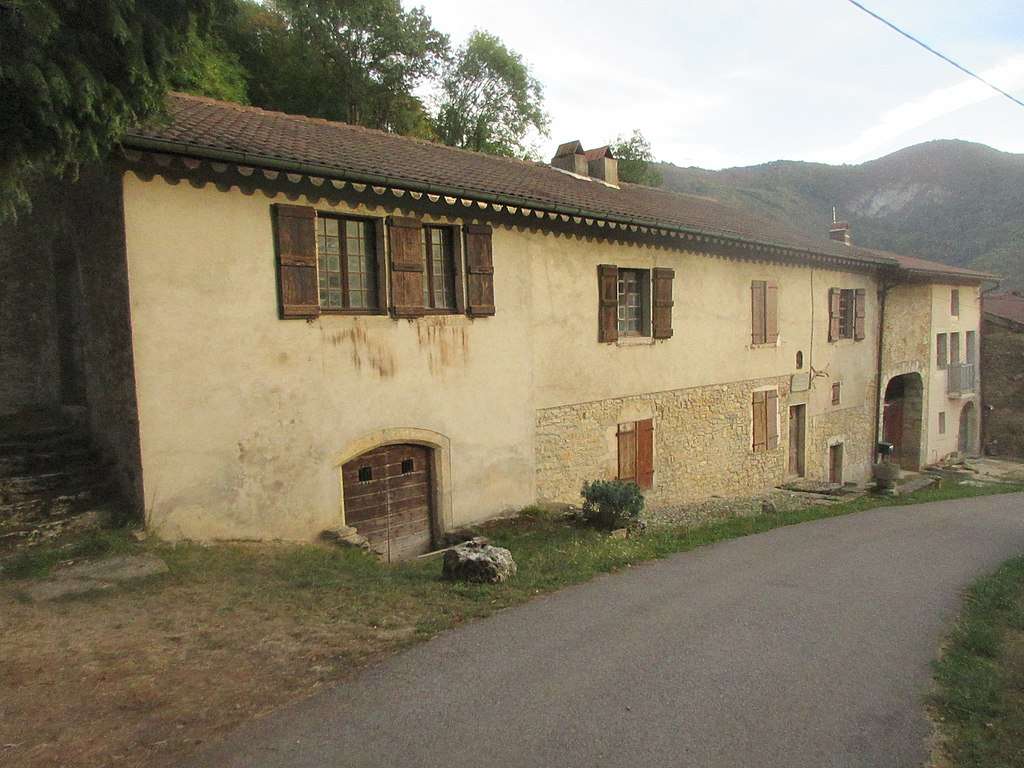 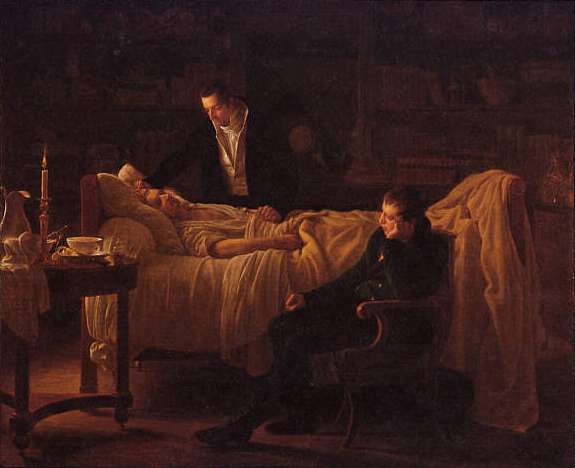 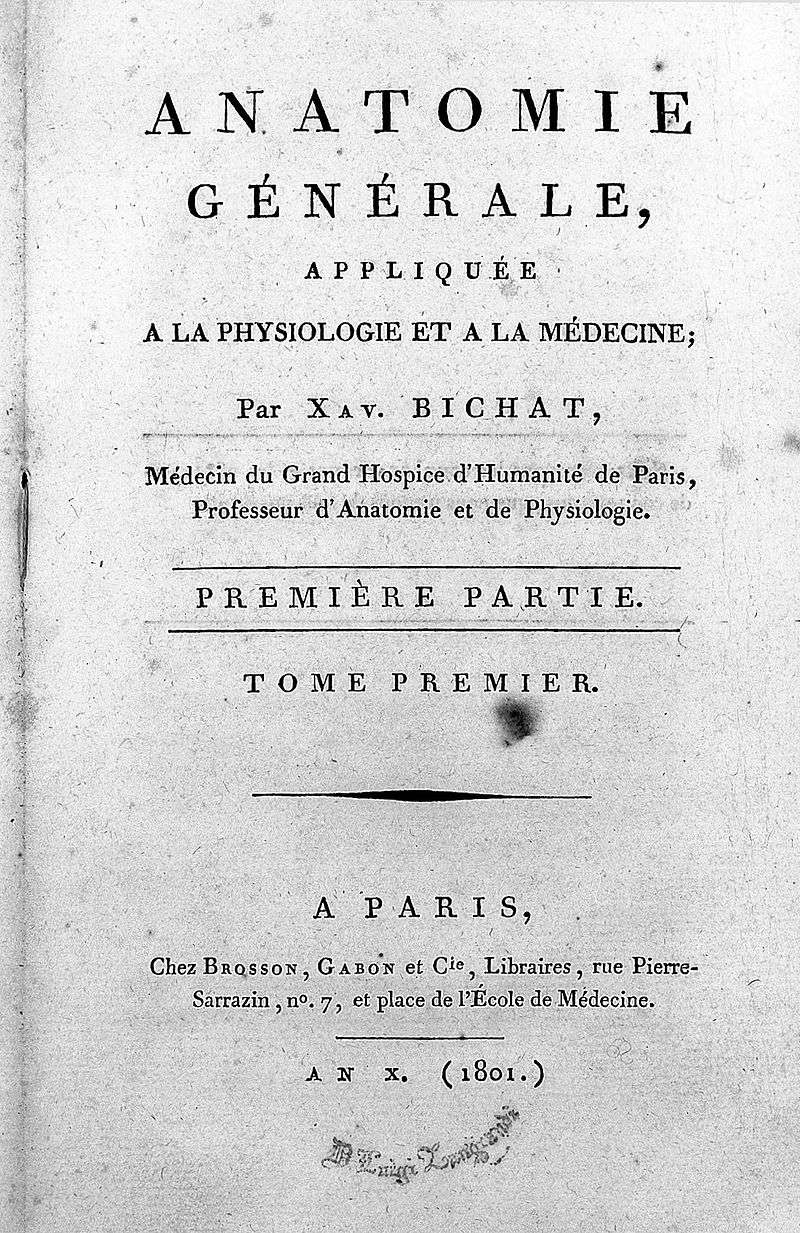 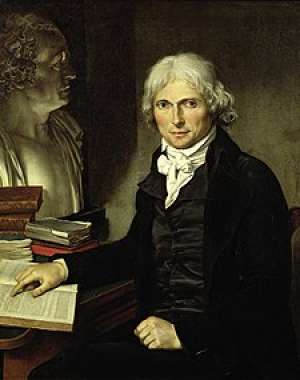 Life consists in the sum of the functions, by which death is resisted.

Marie François Xavier Bichat was a French anatomist and pathologist, known as the father of modern histology. Although he worked without a microscope, Bichat distinguished 21 types of elementary tissues from which the organs of the human body are composed. He was also "the first to propose that tissue is a central element in human anatomy, and he considered organs as collections of often disparate tissues, rather than as entities in themselves".

Although Bichat was "hardly known outside the French medical world" at the time of his early death, forty years later "his system of histology and pathological anatomy had taken both the French and English medical worlds by storm." The Bichatian tissue theory was "largely instrumental in the rise to prominence of hospital doctors" as opposed to empiric therapy, as "diseases were now defined in terms of specific lesions in various tissues, and this lent itself to a classification and a list of diagnoses".

Bichat was born in Thoirette, Franche-Comté. His father was Jean-Baptiste Bichat, a physician who had trained in Montpellier and was Bichat's first instructor. His mother was Jeanne-Rose Bichat, his father's wife and cousin. He was the eldest of four children. He entered the college of Nantua, and later studied at Lyon. He made rapid progress in mathematics and the physical sciences, but ultimately devoted himself to the study of anatomy and surgery under the guidance of Marc-Antoine Petit 1766–1811, chief surgeon at the Hôtel-Dieu of Lyon.

At the beginning of September 1793, Bichat was designated to serve as a surgeon with the Army of the Alps in the service of the surgeon Buget at the hospital of Bourg. He went home in March 1794, then moved to Paris, where he became a pupil of Pierre-Joseph Desault at the Hôtel-Dieu, "who was so strongly impressed with his genius that he took him into his house and treated him as his adopted son." He took active part in Desault's work, at the same time pursuing his own research in anatomy and physiology.

The sudden death of Desault in 1795 was a severe blow to Bichat. His first task was to discharge the obligations he owed his benefactor by contributing to the support of his widow and her son and by completing the fourth volume of Desault's Journal de Chirurgie, which was published the following year. In 1796, he and several other colleagues also formally founded the Société Médicale d'Émulation, which provided an intellectual platform for debating problems in medicine.

In 1797, Bichat began a course of anatomical demonstrations, and his success encouraged him to extend the plan of his lectures, and boldly to announce a course of operative surgery. At the same time, he was working to reunite and digest in one body the surgical doctrines which Desault had published in various periodical works; of these he composed Œuvres chirurgicales de Desault, ou tableau de sa doctrine, et de sa pratique dans le traitement des maladies externes 1798–1799, a work in which, although he professes only to set forth the ideas of another, he develops them "with the clearness of one who is a master of the subject."

In 1798, he gave in addition a separate course of physiology. A dangerous attack of haemoptysis interrupted his labors for a time; but the danger was no sooner past than he plunged into new engagements with the same ardour as before. Bichat's next book, Traité des membranes Treatise on Membranes, included his doctrine of tissue pathology with a distinction of 21 different tissues. As worded by A. S. Weber,

As soon as it appeared (January and February of 1800), it was regarded as a basic and classic text. It was cited in a host of other works, and almost all thinking men placed it with honor in their libraries.

His next publication was the Recherches physiologiques sur la vie et la mort Physiological Researches upon Life and Death, 1800, and it was quickly followed by his Anatomie générale 1801 in four volumes, the work which contains the fruits of his most profound and original researches. He began another work, under the title Anatomie descriptive 1801–1803, in which the organs were arranged according to his peculiar classification of their functions but lived to publish only the first two volumes.

In 1800, Bichat was appointed physician to the Hôtel-Dieu. "He engaged in a series of examinations, with a view to ascertain the changes induced in the various organs by disease, and in less than six months he had opened above six hundred bodies. He was anxious also to determine with more precision than had been attempted before, the effects of remedial agents, and instituted with this view a series of direct experiments which yielded a vast store of valuable material. Towards the end of his life he was also engaged on a new classification of diseases."

On 8 July 1802, Bichat fell in a faint while descending a set of stairs at the Hôtel-Dieu. He had been spending considerable time examining some macerated skin, "and from which, of course, putrid emanations were being sent forth", during which he probably contracted typhoid fever; "the next day he complained of a violent headache; that night, leeches were applied behind his ears; on the 10th, he took an emetic; on the 15th, he passed into a coma and became convulsive." Bichat died on 22 July, aged 30.

Bichat has fallen on a field of battle which numbers many a victim; no one has done in the same time so much and so well.

Ten days after this, the French government caused his name, together with that of Desault, to be inscribed on a memorial plaque at the Hôtel-Dieu.

Bichat was first buried at Sainte-Catherine Cemetery. With the closing of the latter, his remains were transferred to Père Lachaise Cemetery on 16 November 1845, followed by "a cortège of upwards of two thousand persons" after a funeral service at Notre-Dame.

Bichat is considered to have been a vitalist, though in no way an anti-experimentalist:

Bichat moved from the tendency typical of the French vitalistic tradition to progressively free himself from metaphysics in order to combine with hypotheses and theories which accorded to the scientific criteria of physics and chemistry.

According to Russell C. Maulitz, "of the Montpellier vitalists, the clearest influence on Bichat was probably Théophile de Bordeu 1722–1776, whose widely disseminated writings on the vitalistic interpretation of life fell early into Bichat's hands."

In his Physiological Researches upon Life and Death 1800, Bichat defined life as "the totality of those set of functions which resist death", adding:

Bichat thought that animals exhibited vital properties which could not be explained through physics or chemistry. In his Physiological Researches, he considered life to be separable into two parts: the organic life "vie organique"; also sometimes called the vegetative system and the animal life "vie animale", or animal system. The organic life was "the life of the heart, intestines, and the other inner organs." As worded by Stanley Finger, "Bichat theorized that this life was regulated through the système des ganglions the ganglionic nervous system, a collection of small independent 'brains' in the chest cavity." In contrast, animal life "involved symmetrical, harmonious organs, such as the eyes, ears, and limbs. It included habit and memory, and was ruled by the wit and the intellect. This was the function of the brain itself, but it could not exist without the heart, the center of the organic life."

According to A. S. Weber,

Bichat's use of the concept "vie animale" recalls the original Latin root anima or soul, the governor of movement, growth, nutrition and reason in the body in classical thought. Bichat's division is not new, and closely parallels the Platonic and later Christian division of body and soul, and the animism of Paracelsus, van Helmont, Georg Stahl and the Montpellier school of medicine.

Bichat's main contribution to medicine and physiology was his perception that the diverse body of organs contain particular tissues or membranes, and he described 21 such membranes, including connective, muscle, and nerve tissue. As he explained in Anatomie générale,

Chemistry possesses its simple bodies, which, by various combinations, form compound bodies [...]. Likewise anatomy has its simple tissues, which by combining [..] compose the organs.

Bichat did not use a microscope because he distrusted it; therefore his analyses did not include any acknowledgement of cellular structure. Nonetheless, he formed an important bridge between the organ pathology of Giovanni Battista Morgagni and the cell pathology of Rudolf Virchow. Bichat "recognized disease as a localized condition that began in specific tissues."

Michel Foucault regarded Bichat as the chief architect in developing the understanding of the human body as the origin of illness, redefining both conceptions of the body and disease. Bichat's figure was of great importance to Arthur Schopenhauer, who wrote of the Recherches physiologiques as "one of the most profoundly conceived works in the whole of French literature."

A large bronze statue of Bichat by David d'Angers was erected in 1857 in the cour d'honneur of the École de Chirurgie in Paris, with the support of members of the Medical Congress of France which was held in 1845. Bichat is also represented on the Panthéon's pediment, of which the bas-relief is D'Angers' work as well. The name of Bichat is one of the 72 names inscribed on the Eiffel Tower.

George Eliot enthusiastically recounted Bichat's career in her 1872 novel Middlemarch. In Madame Bovary 1856, Gustave Flaubert, himself the son of a prominent surgeon, wrote of a physician character who "belonged to the great school of surgery that sprang up around Bichat, to that generation, now extinct, of philosopher-practitioners who, cherishing their art with fanatical passion, exercised it with exaltation and sagacity."

Best Known For: The concept of tissue
Fulfilled his Potential: Yes
Father’s Name: Jean-Baptiste Bichat
Father’s Occupation: Physician
Mother’s Name: Jeanne-Rose Bichat
Citizen Of: France
What Do You Think Of That Genius? 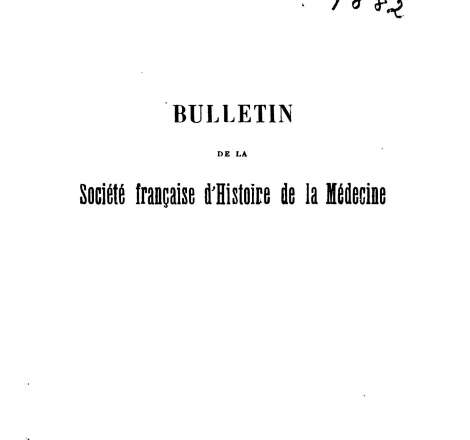 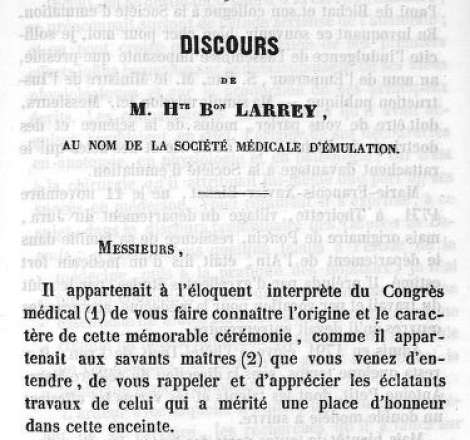 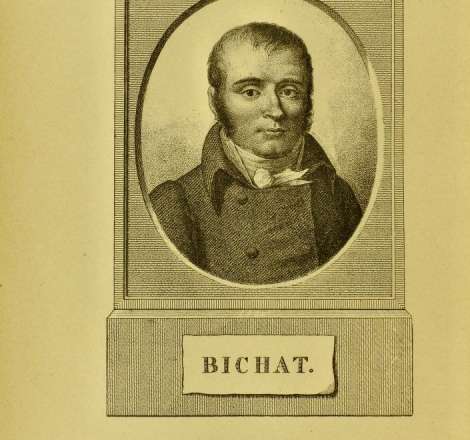 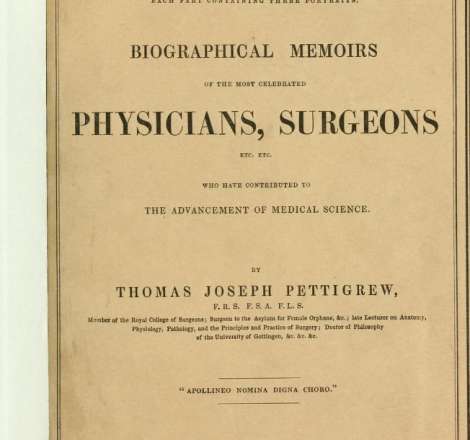 Medicine
Biographical memoirs of the most celebrated physicians, surgeons etc. 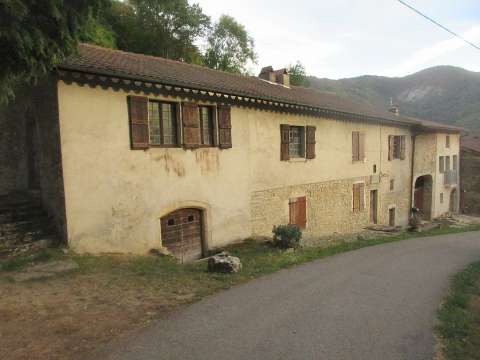 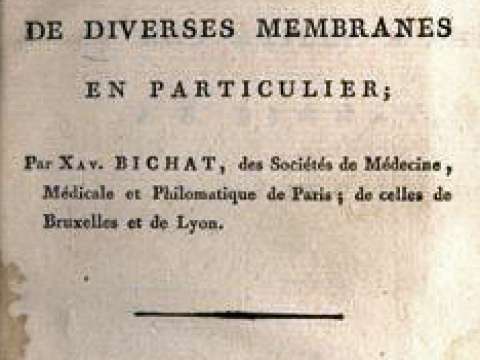 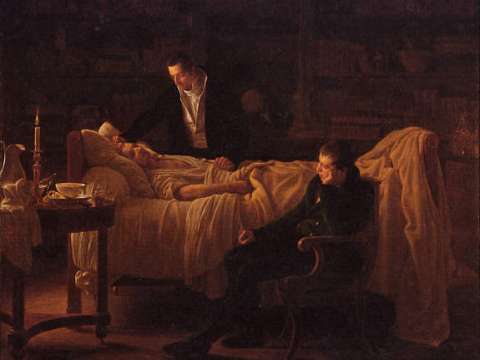 The Death of Xavier Bichat by Louis Hersent (1817 Salon) 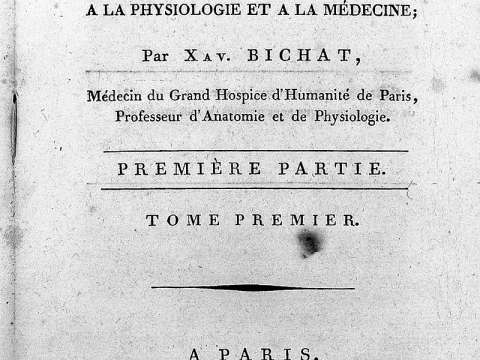 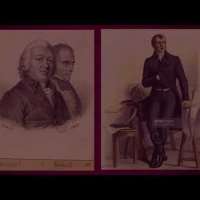 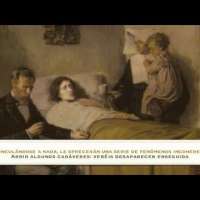 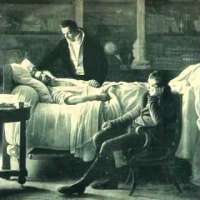 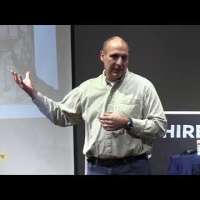 Montshire Talks - Frankenstein and the Philosophy of Science 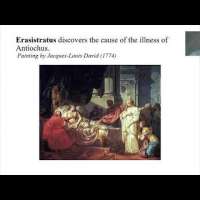 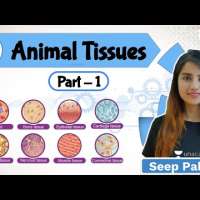 NEET: Animal Tissues
What Do You Think Of That Genius? 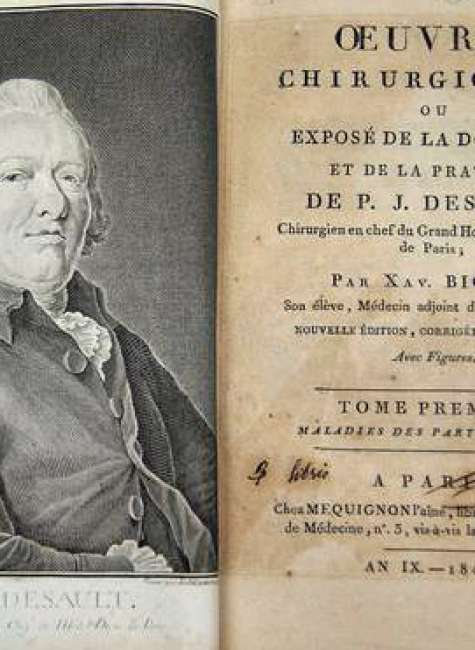 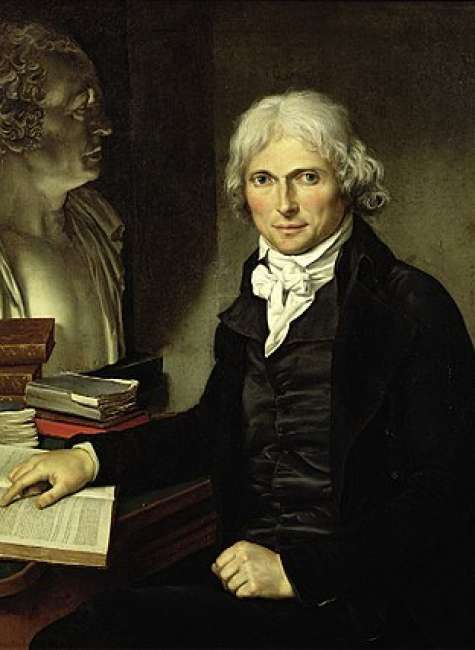