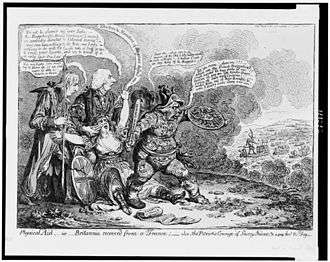 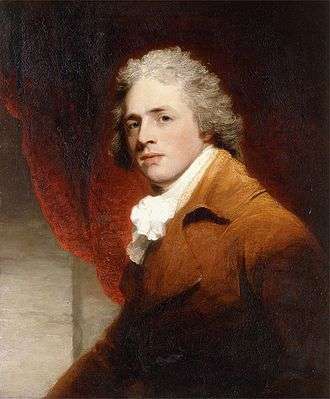 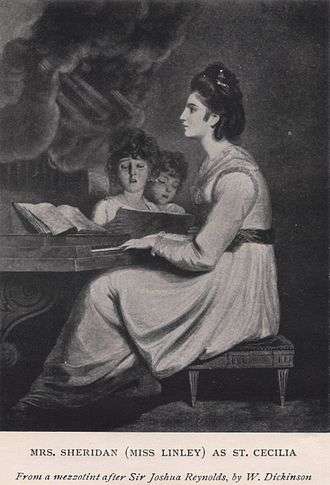 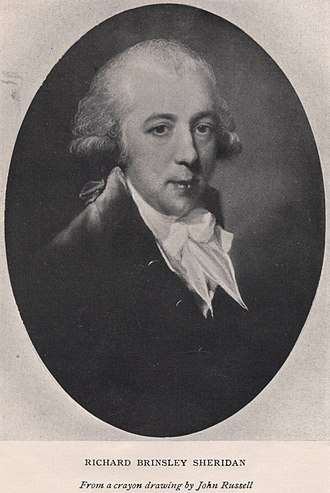 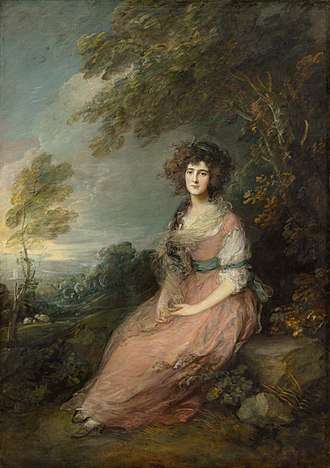 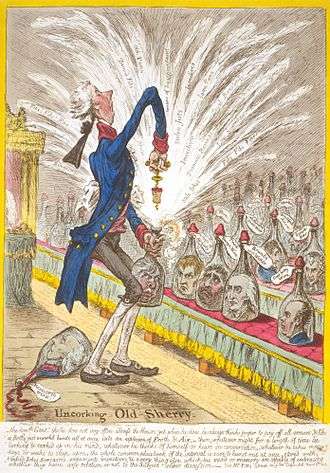 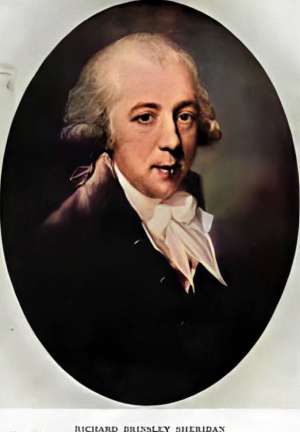 Richard Brinsley Butler Sheridan was an Irish satirist, a playwright, poet, and long-term owner of the London Theatre Royal, Drury Lane. He is known for his plays such as The Rivals, The School for Scandal, The Duenna and A Trip to Scarborough. He was also a member of the Whig MP (Political party) for 32 years in the British House of Commons for Stafford 1780–1806, Westminster 1806–1807, and Ilchester 1807–1812. He is buried at Poets' Corner in Westminster Abbey. His plays remain a central part of the canon and are regularly performed worldwide.

Sheridan was born in 1751 in Dublin, Ireland, where his family had a house on then fashionable Dorset Street. His mother, Frances Sheridan, was a playwright and novelist. She had two plays produced in London in the early 1760s, though she is best known for her novel The Memoirs of Miss Sidney Biddulph 1761. His father, Thomas Sheridan, was for a while an actor-manager at the Smock Alley Theatre in Dublin, but following his move to England in 1758 he gave up acting and wrote several books on the subject of education, especially the standardisation of the English language in education.

While his family was in Dublin, Richard attended the English Grammar School in Grafton Street. In 1758, when he was seven years old, the Sheridans moved permanently to England.

He was a pupil at Harrow School from 1762 to 1768. At the end of his 1768 school year, his father employed a private tutor, Lewis Ker, to direct his studies in his father's house in London, while Domenico Angelo instructed him in fencing and horsemanship.

In 1772, aged 20 or 21, Sheridan fought two duels with Captain Thomas Mathews, who had written a newspaper article defaming the character of Elizabeth Ann Linley, whom Sheridan intended to marry. In the first duel, they agreed to fight in Hyde Park, but finding it too crowded they went first to the Hercules Pillars tavern on the site where Apsley House now stands at Hyde Park Corner and then on to the Castle Tavern in Henrietta Street, Covent Garden. Far from its romantic image, the duel was short and bloodless. Mathews lost his sword and, according to Sheridan, was forced to 'beg for his life' and sign a retraction of the article. The apology was made public and Mathews, infuriated by the publicity the duel had received, refused to accept his defeat as final and challenged Sheridan to another duel. Sheridan was not obliged to accept this challenge but could have become a social pariah if he had not. The second duel, fought in July 1772 at Kingsdown near Bath, was a much more ferocious affair. This time both men broke their swords but carried on fighting in a 'desperate struggle for life and honour'. Both were wounded, Sheridan dangerously, and he had to be 'borne from the field with a portion of his antagonist's weapon sticking through an ear, his breast-bone touched, his whole body covered with wounds and blood, and his face nearly beaten to jelly with the hilt of Mathews' sword'. Mathews escaped in a post chaise. Eight days after the bloody affair the Bath Chronicle was able to announce that Sheridan was out of danger.

Later that year, Elizabeth and the 21-year-old Richard eloped and set up house in London on a lavish scale. Sheridan had little money and no immediate prospects of any, other than his wife's dowry. The young couple entered the fashionable world and apparently held up their end in entertaining. Sheridan was a patron of Margaret Cuyler and she was his presumed mistress. Under his wing she appeared at Drury Lane in January 1777 despite being a poor actress.

In 1775 Sheridan's first play, The Rivals, was produced at London's Covent Garden Theatre. It was a failure on its first night. Sheridan cast a more capable actor in the lead for its second performance, and it was a huge success, immediately establishing the young playwright's reputation and the favour of fashionable London. It went on to become a standard of English literature.

Shortly after the success of The Rivals, Sheridan and his father-in-law Thomas Linley the Elder, a successful composer, produced the opera The Duenna. This piece, warmly received, played for seventy-five performances.

His most famous play, The School for Scandal, premiered at Drury Lane on 8 May 1777. It is considered one of the greatest comedies of manners in English. It was followed by The Critic 1779, an updating of the satirical Restoration play The Rehearsal.

Having quickly made his name and fortune, in 1776 Sheridan bought David Garrick's share in the Drury Lane patent, and in 1778 the remaining share; his later plays were all produced there. In 1778 Sheridan wrote The Camp, which commented on the ongoing threat of a French invasion of Britain. The same year Sheridan's brother-in-law Thomas Linley, a young composer who worked with him at Drury Lane Theatre, died in a boating accident. Sheridan had a rivalry with his fellow playwright Richard Cumberland and included a parody of Cumberland in his play The Critic. On 24 February 1809 despite the much vaunted fire safety precautions of 1794 the theatre burned down. On being encountered drinking a glass of wine in the street while watching the fire, Sheridan was famously reported to have said, 'A man may surely be allowed to take a glass of wine by his own fireside.' Sheridan was the manager of the theatre for many years, and later became sole owner with no managerial role.

In 1780, Sheridan entered the House of Commons as the ally of Charles James Fox on the side of the American Colonials in the political debate of that year. He is said to have paid the burgesses of Stafford five guineas apiece to allow him to represent them. As a consequence, his first speech in Parliament was a defence against the charge of bribery.

In 1787 Sheridan demanded the impeachment of Warren Hastings, the first Governor-General of India. His speech in the House of Commons was described by Edmund Burke, Charles James Fox, and William Pitt as the greatest ever delivered in ancient or modern times.

In 1793, during the debates on the Aliens Act designed to prevent French Revolutionary spies and saboteurs from flooding into the country, Edmund Burke made a speech in which he claimed there were thousands of French agents in Britain ready to use weapons against the authorities. To dramatically emphasise his point he threw down a knife onto the floor of the House of Commons. Sheridan shouted, 'Where's the fork?', which led to much of the house collapsing in laughter.

During the invasion scare of 1803 Sheridan penned an 'Address to the People':

When, after 32 years in Parliament, he lost re-election in 1812, his creditors closed in on him and his last years were harassed by debt and disappointment. On hearing of his debts, the American Congress offered Sheridan £20,000 in recognition of his efforts to prevent the American War of Independence. He refused the offer.

He was twice married. He and his first wife Elizabeth had a son:

Elizabeth also had a daughter, Mary, born 30 March 1792 but fathered by her lover, Lord Edward FitzGerald. After Elizabeth's death, Sheridan fulfilled his promise to look after Elizabeth and FitzGerald's baby daughter. A nurse was employed to care for the child at his Wanstead home. The baby had a series of fits one evening in October 1793, when she was 18 months old, dying before a doctor could attend. She was interred beside her mother at Wells Cathedral.

In 1795, Richard B. Sheridan married Hester Jane Ogle 1776–1817, daughter of the Dean of Winchester. They had at least one child: Charles Brinsley Sheridan 1796–1843. At one time Sheridan owned Downe House, Richmond Hill in London.

In December 1815 Sheridan became ill and was largely confined to bed. He died in poverty. However, dukes, earls, lords, viscounts, the Lord Mayor of London, and other notables attended his funeral, and he was buried in the Poets' Corner of Westminster Abbey.

In 1825 the Irish writer Thomas Moore published a sympathetic two-volume biography, Memoirs of the Life of Richard Brinsley Sheridan, which became a major influence on subsequent perceptions. A Royal Society of Arts blue plaque was unveiled in 1881 to commemorate Sheridan at 14 Savile Row in Mayfair. Another plaque is in Stafford.

He also wrote a selection of poems and political speeches during his time in parliament. 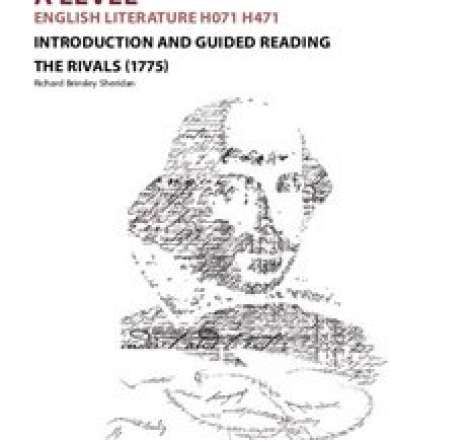 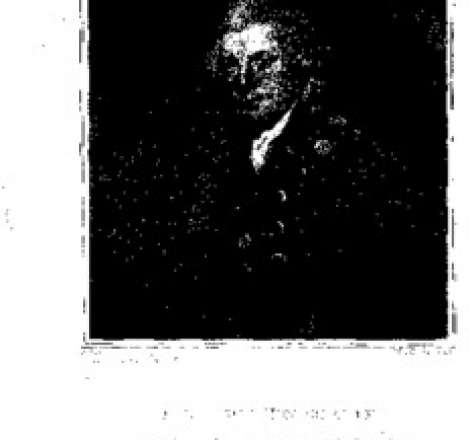 literature
Memoirs of the life of the right honourable Richard 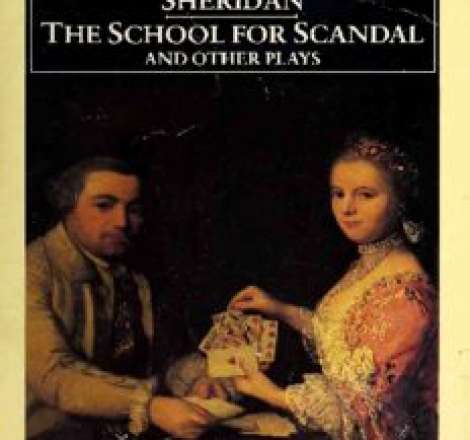 literature
The School for Scandal and Other Plays 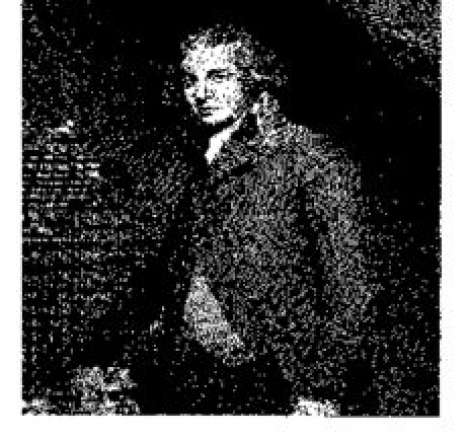 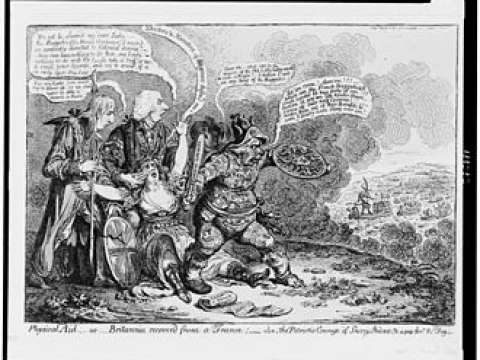 Physical Aid,—or—Britannia recover'd from a Trance;—also, the Patriotic Courage of Sherry Andrew; & a peep thro' the Fog (1803) by James Gillray 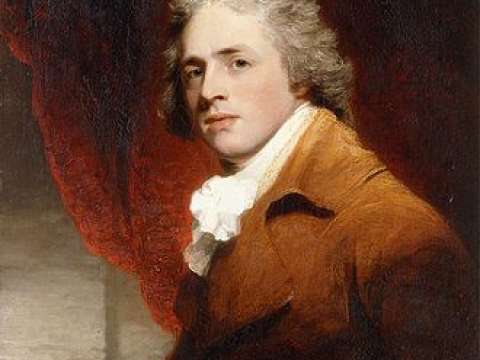 Portrait of a Gentleman, traditionally identified as Richard Brinsley Sheridan, by John Hoppner 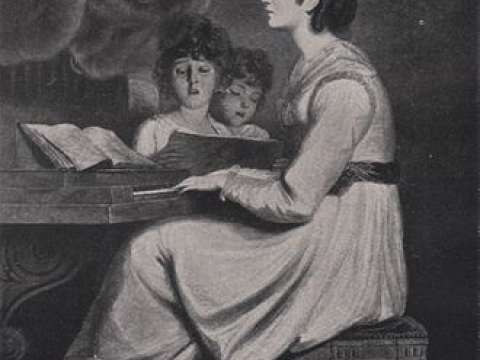 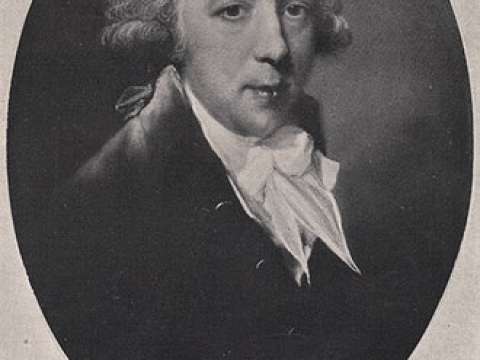 Scanned from The Dramatic Works of Richard Brinsley Sheridan 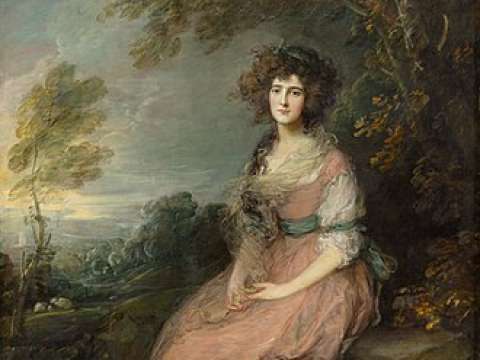 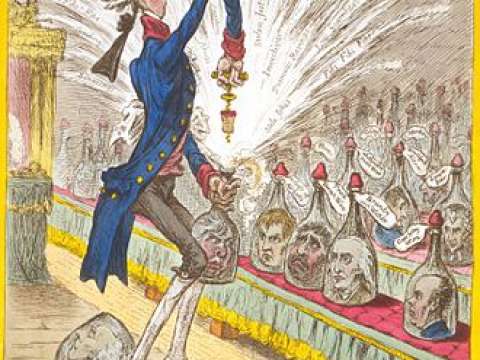 In Uncorking Old Sherry (1805), James Gillray caricatured Sheridan as a bottle of sherry, uncorked by Pitt and bursting out with puns, invective, and fibs. 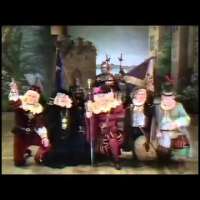 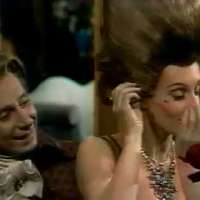 The School for Scandal by Richard Sheridan 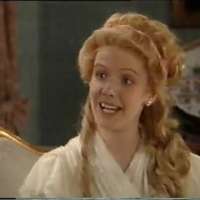 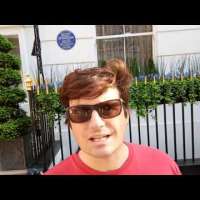 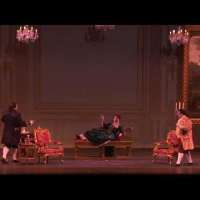 The School for Scandal Part 1 subtitles 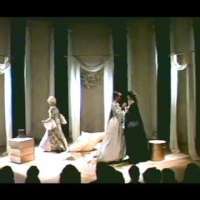 The Rivals by Richard Brinsley Sheridan 1991
What Do You Think Of That Genius? 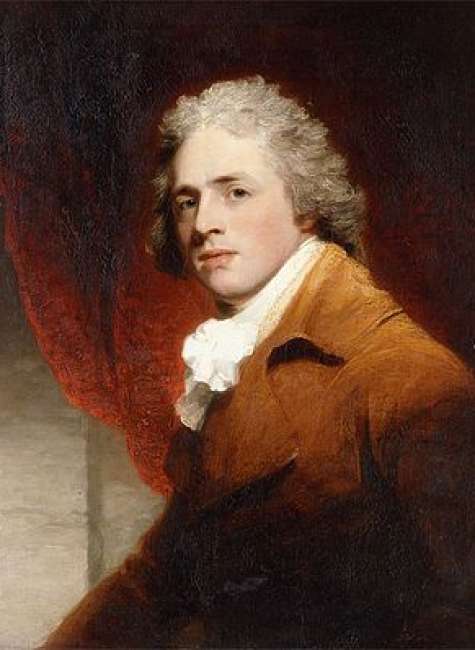 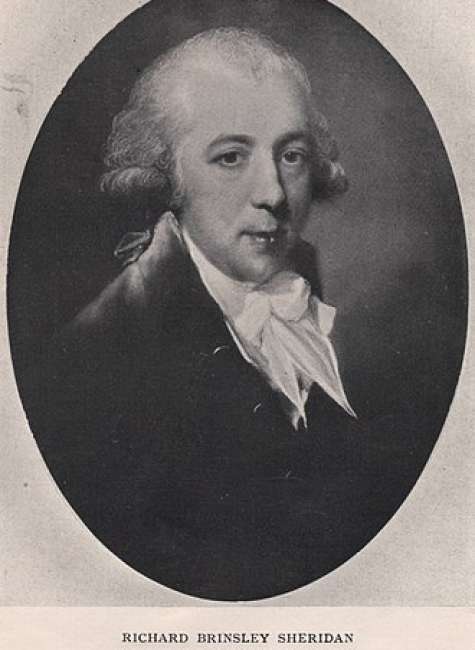