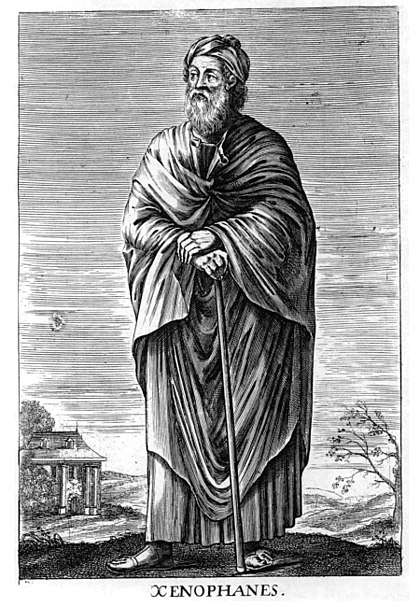 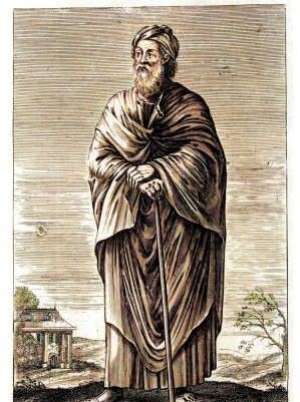 Xenophanes of Colophon was a Greek philosopher, theologian, poet, and critic of religious polytheism. Xenophanes is seen as one of the most important Pre-Socratic philosophers. Eusebius quoting Aristocles of Messene says that Xenophanes was the founder of a line of philosophy that culminated in Pyrrhonism. This line begins with Xenophanes and goes through Parmenides, Melissus of Samos, Zeno of Elea, Leucippus, Democritus, Protagoras, Nessas of Chios, Metrodorus of Chios, Diogenes of Smyrna, Anaxarchus, and finally Pyrrho. It had also been common since antiquity to see Xenophanes as the teacher of Zeno of Elea, the colleague of Parmenides, and generally associated with the Eleatic school, but common opinion today is likewise that this is false.

Xenophanes lived a life of travel, having left Ionia at the age of 25 and continuing to travel throughout the Greek world for another 67 years. Some scholars say he lived in exile in Sicily. Knowledge of his views comes from fragments of his poetry, surviving as quotations by later Greek writers. To judge from these, his elegiac and iambic poetry criticized and satirized a wide range of ideas, including Homer and Hesiod, the belief in the pantheon of anthropomorphic gods and the Greeks' veneration of athleticism. He is the earliest Greek poet who claims explicitly to be writing for future generations, creating "fame that will reach all of Greece, and never die while the Greek kind of songs survives."

Xenophanes was a native of Colophon, a city in Ionia now western Turkey. Some say he was the son of Orthomenes, others the son of Dexius. He is said to have flourished during the 60th Olympiad 540–537 BC. His surviving work refers to Thales, Epimenides, and Pythagoras, and he himself is mentioned in the writings of Heraclitus and Epicharmus. In a fragment of his elegies, he describes the Median invasion as an event that took place in his time, possibly referring to the expedition of Harpagus against the Greek cities in Ionia 546/5 BC. He left his native land as a fugitive or exile and went to the Ionian colonies in Sicily, Zancle and Catana. He probably lived for some time in Elea founded by the Phocaeans in the 61st Olympiad 536–533 BC, since he wrote about the foundation of that colony.

According to an elegy reputedly composed when he was 92 years old, he left his native land at the age of 25 and then lived 67 years in other Greek lands.

According to biographer Diogenes Laërtius, Xenophanes wrote in hexameters and also composed elegies and iambics against Homer and Hesiod. Laertius also mentions two historical poems concerning the founding of Colophon and Elea, but of these, only the titles have been preserved. There is no good authority that says that Xenophanes wrote a philosophical poem. The Neoplatonist philosopher Simplicius writes that he had never met with the verses about the earth stretching infinitely downwards fr. 28, even though he had access to many philosophical works. Several of the philosophical fragments are derived from commentators on Homer. It is thus likely that the philosophical remarks of Xenophanes were expressed incidentally in his satires. The satires are called Silloi by late writers, and this name may go back to Xenophanes himself, but it may originate in the fact that the Pyrrhonist philosopher Timon of Phlius, the "sillographer" 3rd century BC, put much of his own satire upon other philosophers into the mouth of Xenophanes, one of the few philosophers Timon praises in his work.

Xenophanes denied that a criterion of truth exists. He is credited with being one of the first philosophers to distinguish between true belief and knowledge, which he further developed into the prospect that you can know something but not really know it. Due to the lack of whole works by Xenophanes, his views are difficult to interpret, so that the implication of knowing being something deeper "a clearer truth" may have special implications, or it may mean that you cannot know something just by looking at it. It is known that the most and widest variety of evidence was considered by Xenophanes to be the surest way to prove a theory.

His epistemology, which is still influential today, held that there actually exists a truth of reality, but that humans as mortals are unable to know it. Hence his views are considered a precursor to Pyrrhonism and subsequent Western philosophical skepticism. He summed up his view in these quotes:

Karl Popper read Xenophanes as saying that it is possible to act only on the basis of working hypotheses—we may act as if we knew the truth, as long as we know that this is extremely unlikely. Xenophanes' views then might serve as a basis of Critical rationalism.

Xenophanes concluded from his examination of fossils that water once must have covered all of the Earth's surface. This use of evidence was an important step in advancing from simply stating an idea to backing it up by evidence and observation.

There is one fragment dealing with the management of a feast, another which denounces the exaggerated importance attached to athletic victories, and several which deny the humanized gods of Homer. Arguments such as these made Xenophanes infamous for his attacks on "conventional military and athletic virtues of the time" and well known to side with the intellectual instead.

Xenophanes' surviving writings display a skepticism that became more commonly expressed during the fourth century BC. He satirized traditional religious views of his time as human projections. He aimed his critique at the polytheistic religious views of earlier Greek poets and of his own contemporaries: "Homer and Hesiod," one fragment states, "have attributed to the gods all sorts of things that are matters of reproach and censure among men: theft, adultery, and mutual deception." Xenophanes is quoted, memorably, in Clement of Alexandria, arguing against the conception of gods as fundamentally anthropomorphic:

Other passages quoted by Clement of Alexandria that argue against the traditional Greek conception of gods include:

Regarding Xenophanes' theology five key concepts about God can be formed. God is: beyond human morality, does not resemble human form, cannot die or be born God is divine thus eternal, no divine hierarchy exists, and God does not intervene in human affairs. While Xenophanes is rejecting Homeric theology, he is not questioning the presence of a divine entity, rather his philosophy is a critique on Ancient Greek writers and their conception of divinity.

Xenophanes espoused a belief that "God is one, supreme among gods and men, and not like mortals in body or in mind." He maintained there was one greatest God. God is one eternal being, spherical in form, comprehending all things within himself, is the absolute mind and thought, therefore is intelligent, and moves all things, but bears no resemblance to human nature either in body or mind.

God moves all things, but he is thought to be immobile, characterized by oneness B23 and unicity, ethernity B26 and a spiritual nature which is bodiless and isn't anthropomorfic B14, B15, B16. He has a free will and is the Highest Good, he embodies the beauty of the moral perfection and of the absence of sin. The Orphism religion and the Pythagorean philosophy introduced in the Greek spirituality the notions of guilt and pureness, causing a dichotomyic belief between the divine soul and the mortal body. Their doctrines resulted nont comppliant with the traditional religions traded by Homer and Hesiod. The thought of Xenophanes was summarized as monolotraous and pantheistic by the ancient doxographies of Aristotle, Cicero, Diogenes Laertius, Sextus Empiricus, and Plutarch. More particularly, the Methaphysics of Aristotle referred that for him "the All is God" Metaph. 986b=A19. Differently from the human creatures, God has the power to give "immediate execution" in Greek: to phren and make effective his cognitive faculty in Greek: nous.

Xenophanes is considered by some to be a precursor to Parmenides and Spinoza. Because of his development of the concept of a "one god greatest among gods and men" that is abstract, universal, unchanging, immobile and always present, Xenophanes is often seen as one of the first monotheists, in the Western philosophy of religion, although the quotation that seems to point to Xenophanes' monotheism also refers to multiple "gods" who the supreme God is greater than. Physicist and philosopher Max Bernhard Weinstein specifically identified Xenophanes as one of the earliest pandeists.

Xenophanes wrote about two extremes predominating the world: wet and dry or water ὕδωρ and earth γῆ. These two extreme states would alternate between one another, and with the alternation human life would become extinct, then regenerate or vice versa depending on the dominant form. The idea of alternating states and human life perishing and coming back suggests he believed in the principle of causation, another distinguishing step that Xenophanes takes away from Ancient philosophical traditions to ones based more on scientific observation. The argument can be considered a rebuke to Anaximenes' air theory. A detailed account of the wet and dry form theory is found in Hippolytus' Refutation of All Heresies.

He also holds that there is an infinite number of worlds, not overlapping in time. 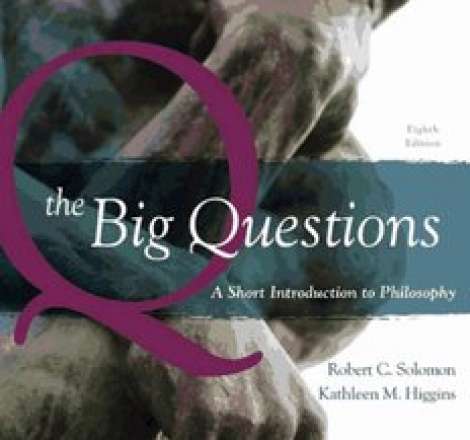 philosophy
The Big Questions: A Short Introduction to Philosophy 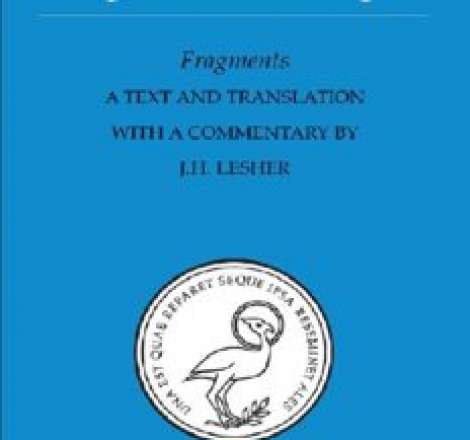 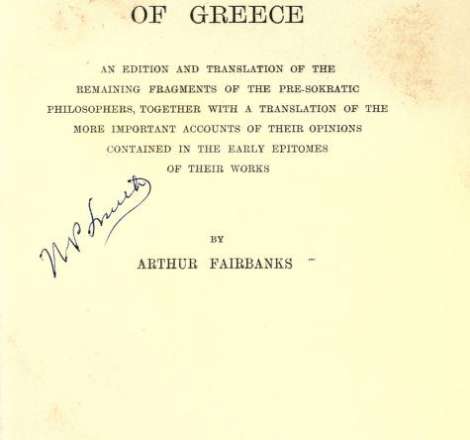 philosophy
The first philosophers of Greece 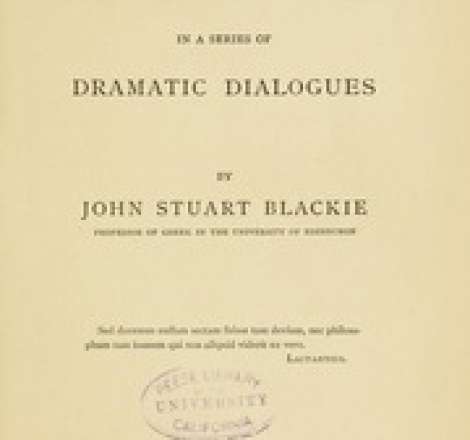 philosophy
The wise men of Greece, in a series of dramatic dialogues 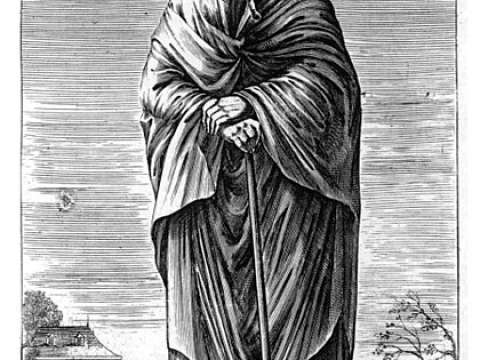 Fictionalized portrait of Xenophanes from a 17th-century engraving 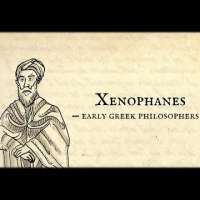 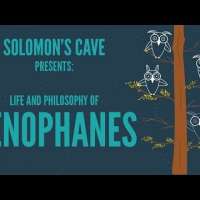 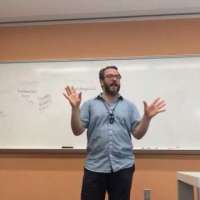 The Pre-Socratics: Xenophanes and Heraclitus 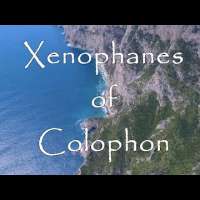 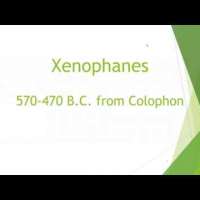 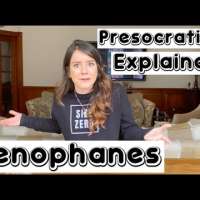 XENOPHANES : Are The Homeric Greek Gods Stupid?
What Do You Think Of That Genius? 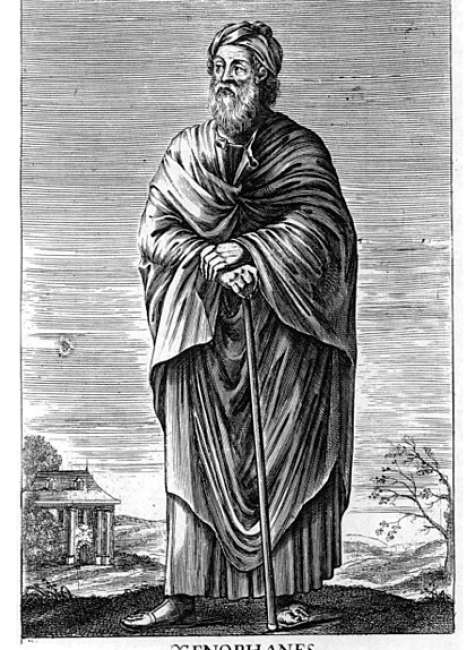