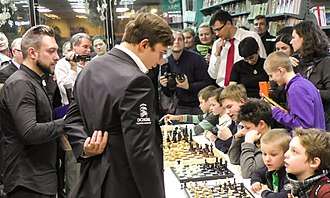 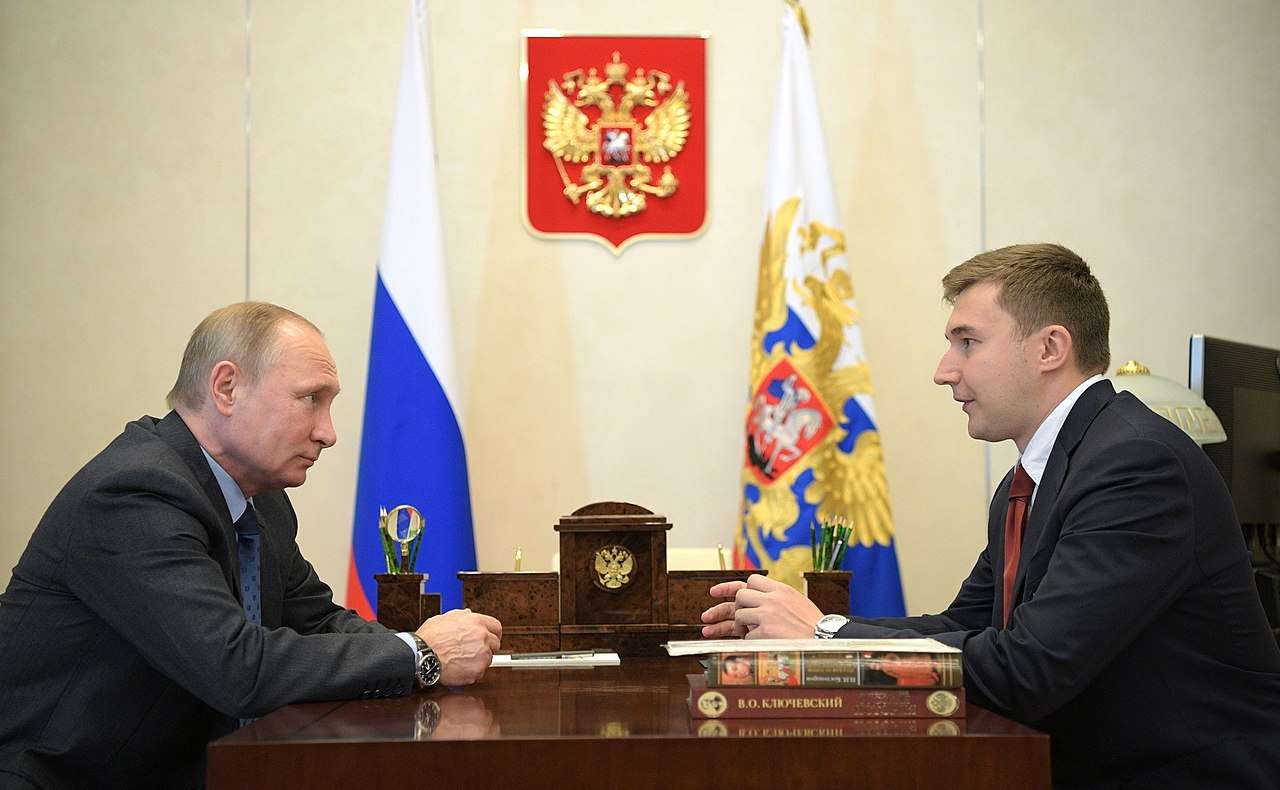 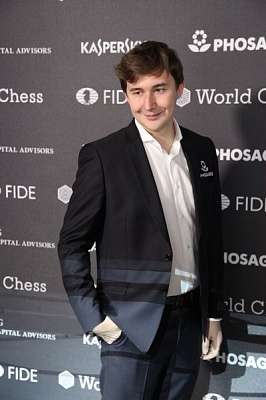 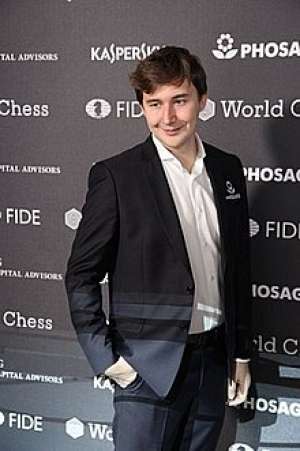 I think you can beat him

Sergey Alexandrovich Karjakin is a Russian chess grandmaster formerly representing Ukraine. A chess prodigy, he holds the record for the world's youngest ever grandmaster, having qualified for the title at the age of 12 years and 7 months.

Karjakin won the European U10 Chess Championship in 1999, and he was World U12 Chess Champion in 2001. He earned the international master title at age 11, and was awarded his grandmaster title in 2003. He represented Ukraine at the Chess Olympiad in 2004, winning team and individual gold. He competed in two more Chess Olympiads for Ukraine, and won the Corus chess tournament in 2009, before transferring to Russia. He has since represented Russia five times in the Chess Olympiad, winning individual gold in 2010. He also won team gold with Russia at the World Team Chess Championship in 2013 and 2019.

Karjakin learned to play chess when he was five years old. He joined the A.V. Momot Club in Kramatorsk, Ukraine and was coached by Vladislav Borovikov, becoming an International Master at age 11 years and 11 months. He won the U10 European championship in 1999, and the U12 world championship in 2001. Also in 2001, Karjakin tied for first place in the U14 European championship with Borki Predojević and Rauf Mamedov, taking the silver medal on tiebreak. In January 2002, he was the official second of fellow Ukrainian Ruslan Ponomariov during the final of the FIDE World Championship, though Karjakin had only just turned 12 at the time.

By scoring grandmaster norms at the Aeroflot Open in Moscow, Alushta tournament in May 2002 and Sudak in August 2002, he surpassed Bu Xiangzhi to become the world's youngest grandmaster at the age of 12 years 7 months - a record that still stands.

In 2003, Karjakin won a six-game match against Alexandra Kosteniuk "Dannemann Classico" in Brissago by a score of 4–2, and tied for second in the Ukrainian championship.

He competed in the 2004 FIDE World Championship in Tripoli, where he lost in the first round to Mikhail Kobalia. Soon after, Karjakin took part in the Dortmund Sparkassen Chess Meeting. Here he defeated the reigning world champion, Vladimir Kramnik, in a blitz game. In October, Karjakin was the only human to win against a computer in the Man vs Machine World Team Championship in Bilbao, Spain, where he was the youngest and lowest rated player, beating Deep Junior. At the 36th Chess Olympiad in Calvià, he was the youngest member of the gold-medal winning Ukrainian team. He also won an individual gold medal thanks to his score of 6½/7 points playing the second reserve board. In December 2004, Karjakin finished second to Boris Gelfand at the Pamplona tournament. In the following month, he won the Group B of the Corus Chess Tournament in Wijk aan Zee, thus qualifying for the 2006 Group A.

Karjakin entered the world's top 100 in the April 2005 FIDE list, at 64th with an Elo rating of 2635. He scored 8½/11 points +7=3-1 to win the Young Stars of the World tournament held in Kirishi, Russia in May. In July, he tied for third place in the European Individual Championship.

In 2006, Karjakin played for the first time in the Wijk aan Zee Corus A tournament, scoring 7/13 points 4 wins, 6 draws, 3 losses. In the same year he took part in the NH Chess Tournament in Amsterdam; it was a match between two teams, "Rising Stars" made up of Karjakin, Magnus Carlsen, Wang Hao, Daniel Stellwagen, and Jan Smeets and "Experience" Alexander Beliavsky, Artur Yusupov, John Nunn, and Ulf Andersson, held with the Scheveningen system. The former won by 28–22.

Karjakin played again in this event in 2007 for the team "Rising Stars", which beat "Experience" by 26½-23½. He was the best player having scored 7/10 and this earned him an invitation for the 2008 Amber chess tournament. In October 2007, Karjakin finished second to Bu Xiangzhi in the Blindfold Chess World Cup in Bilbao, scoring 17 points after five wins, two draws and three losses the scoring system was 3 points for a win, 1 for a draw and 0 for a loss.

During the Chess World Cup 2007, which served as a qualification tournament for the World Chess Championship 2010, Karjakin reached the semi-finals, in which he lost to Alexei Shirov. On the January 2008 FIDE rating list, published just before Karjakin's 18th birthday, he passed the 2700 mark for the first time, often seen as the line that separates "elite" players from other grandmasters, with a new rating of 2732 and a world rank of 13.

In February 2009 he won his first elite tournament in the A group of the Corus chess tournament in Wijk aan Zee category XIX with a score of 8/13.

He won the ACP World Rapid Cup which was conducted from 27 May to 29 May 2010, defeating Dmitry Jakovenko in the final by 4–3.

The next year, Karjakin shared first place second on tiebreak with Magnus Carlsen at the Bazna Kings Tournament and third place with Vassily Ivanchuk and Ian Nepomniachtchi in the category 22 Tal Memorial in Moscow.

In July 2012, Karjakin won the World Rapid Chess Championship a full point ahead of world number one Magnus Carlsen in Astana, Kazakhstan. In the same month, he also tied for first at Dortmund with Fabiano Caruana but came in second after tiebreak.

In Nov-Dec 2012, Karjakin shared first place with Wang Hao and Alexander Morozevich with 6½/9 in the FIDE Grand Prix event held in Tashkent, Uzbekistan.

In March 2014, he finished in second place in the FIDE Candidates Tournament held in Khanty-Mansiysk, Russia, behind Viswanathan Anand. His second at the event was former FIDE World Champion Rustam Kasimdzhanov.

In June 2014, Karjakin won the Norway Chess tournament for the second year running. In this tournament he competed against nine other players, six of which were rated in the FIDE top 10.

Karjakin won the Chess World Cup 2015 in dramatic fashion after going down 0-2 to former World Cup Champion Peter Svidler, eventually winning 6-4 in blitz tiebreaks. By finishing in the final two, Karjakin qualified, along with Svidler, for the 2016 Candidates Tournament.

In the same year, he took part in the Russia-China Challenge Match. The first part of the event took place from 29 July to 1 August in the Heixiazi Island, where Karjakin sequentially knocked out four of the five members of the Chinese team: Wei Yi, Ding Liren, Ni Hua and Yu Yangyi. In the second half of the event, which was held in Harbin in December, he defeated also Wang Yue, leading team Russia to victory.

In March 2016, Karjakin won the 2016 Candidates Tournament in Moscow and qualified to play a match against Magnus Carlsen for the title of World Chess Champion. He defeated Fabiano Caruana in the last round of the tournament to finish with 8½ out of 14, one point ahead of Caruana and Anand.

The World Chess Championship 2016 took place from 11–30 November 2016 in New York City. The format was a match consisting of a maximum of twelve games played under a long classical time control, ending with possible speed chess tiebreak games and an Armageddon game to ensure a winner. Karjakin's record against Carlsen in classical games before the World Championship was: 1 win, 4 losses, and 16 draws. Karjakin won the eighth game, but lost the tenth, leaving the match tied 6-6. Carlsen defeated Karjakin 3-1 in the rapidplay tiebreaks, and won the match.

Karjakin won the 2016 World Blitz Chess Championship, which took place over 29 and 30 December 2016. Before the last round, Carlsen was leading with 16.0/20 while Karjakin was half a point behind. In the last round Carlsen drew with Peter Leko while Karjakin won against Baadur Jobava. Thus, they both finished the tournament with 16½/21. The tie-break the Elo average of the opponents was used to decide the winner, and as Karjakin's opponents had the better average, Karjakin was crowned 2016 World Blitz Champion. The extent of their domination in the event is shown by the fact that their closest rivals, Daniil Dubov, Hikaru Nakamura and Alexander Grischuk three-time world blitz champion, were full two points behind.

In December, he participated in the London Chess Classic, placing eighth with a score of 3½/9.

In March, he competed in the Candidates Tournament 2018. He finished third with 8/14 +4−2=8, one point behind the winner Caruana.

In April, he participated in the fifth edition of Shamkir Chess, finishing third with a score of 5/9 +1−0=8.

From 31st March to 9th April, he competed in Shamkir Chess 2019. He placed in a tie for second, with five points out of nine.

In addition to his strength in classical time controls, Karjakin is very skilled at rapid and blitz chess. Karjakin won the 2012 World Rapid Chess Championship. As of June 2019, Sergey ranked 19th on the FIDE rapid list and 6th on the blitz list.

Karjakin is known for his defensive skills, which has earned him an informal nickname as Russia's "Minister of Defense". He successfully defended inferior positions against World Champion Magnus Carlsen – himself known for grinding out wins from slightly superior positions – in the World Chess Championship 2016, especially games 3 and 4. Karjakin has no qualms about entering an endgame with a small disadvantage if he deems it his best option, as opposed to playing for complications. He is, however, also capable of aggressive play if the position demands it, such as in a 30-move victory over Veselin Topalov at the Gashimov Memorial 2017.

Karjakin married Galiya Kamalova, secretary of the Moscow chess federation, in May 2014. They have two sons, one born in late 2015 and the other born in 2017. He was previously married since 2009 to Ukrainian chess player Kateryna Dolzhikova.

On 25 July 2009, by the decree of the President of Russia Dmitry Medvedev, Karjakin adopted Russian citizenship. Later that year he transferred chess federations from Ukraine to Russia, in order to get sponsorship and better coaching. He has lived in Moscow since 2009. An ethnic Russian, Karjakin considers himself Russian rather than Ukrainian, and supports the 2014 Russian annexation of Crimea from Ukraine and Vladimir Putin. He is Orthodox Christian.

In 2013 he graduated from the Russian State Social University with a degree in social pedagogy.

Best Known For: Becoming a grandmaster at the age of 12.
Number of spouses: 2
First Marriage To: Kateryna Dolzhykova
Second Marriage To: Galiya Kamalova,
Children: 2
Citizen Of: Ukraine (Before 2009) Russian Federation (After 2009)
Media: 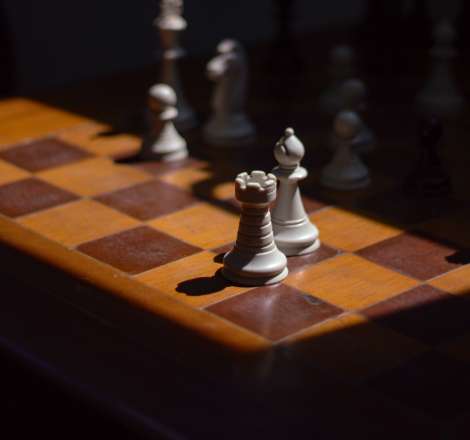 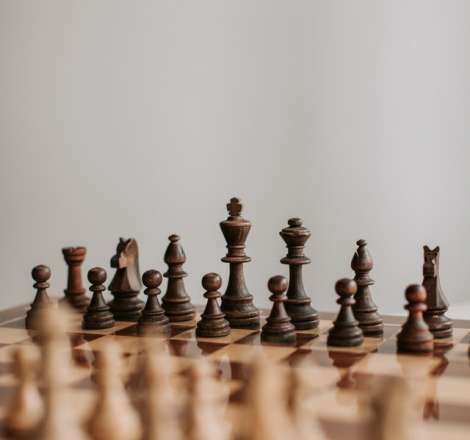 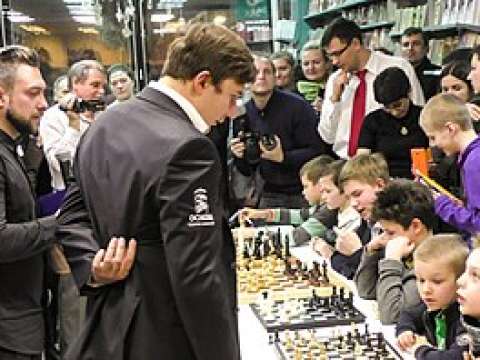 Sergey Karjakin in Moscow in 2017 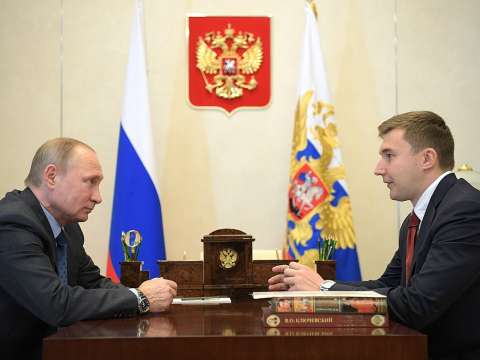 Karjakin (right) with Vladimir Putin in 2017 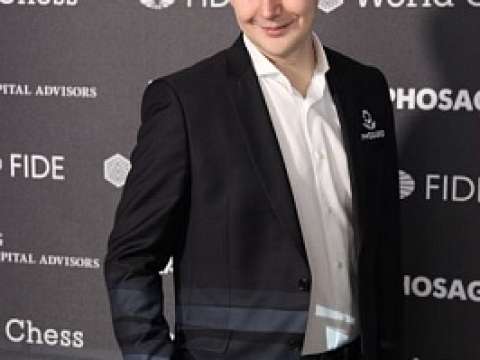 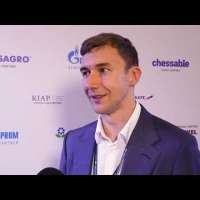 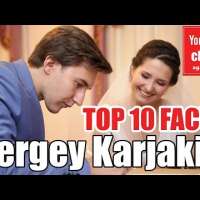 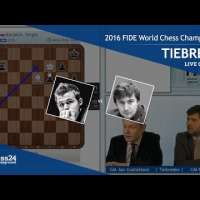 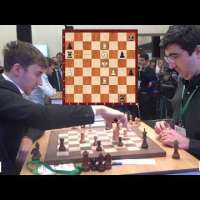 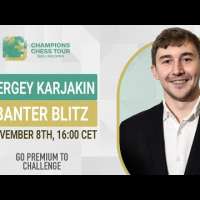 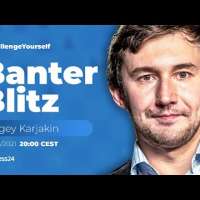 Banter Blitz with Sergey Karjakin
What Do You Think Of That Genius? 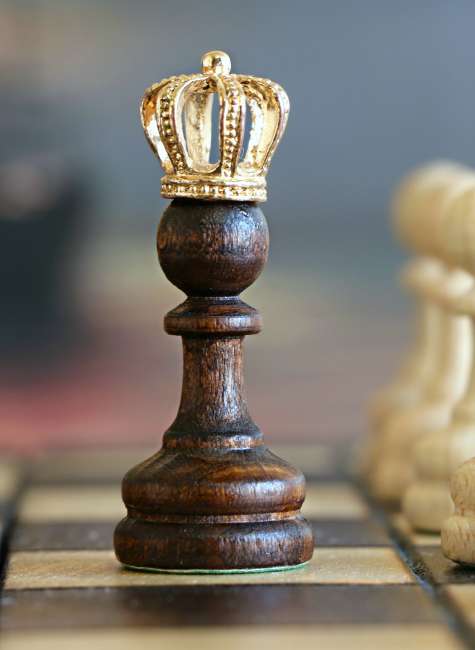 Chess
Karjakin on Carlsen: “I think you can beat him”
chess24.com
0 Comments 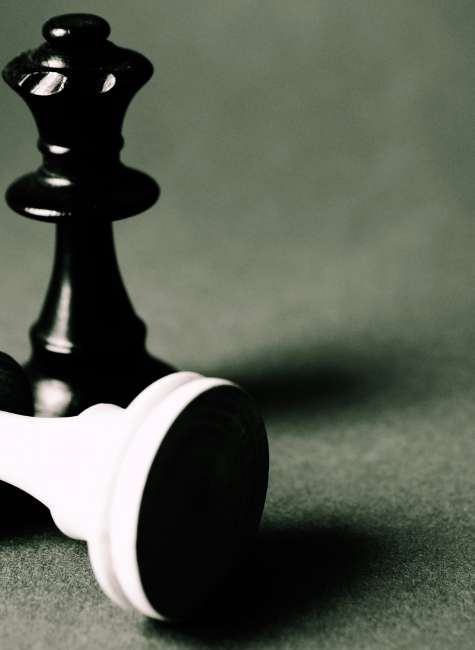