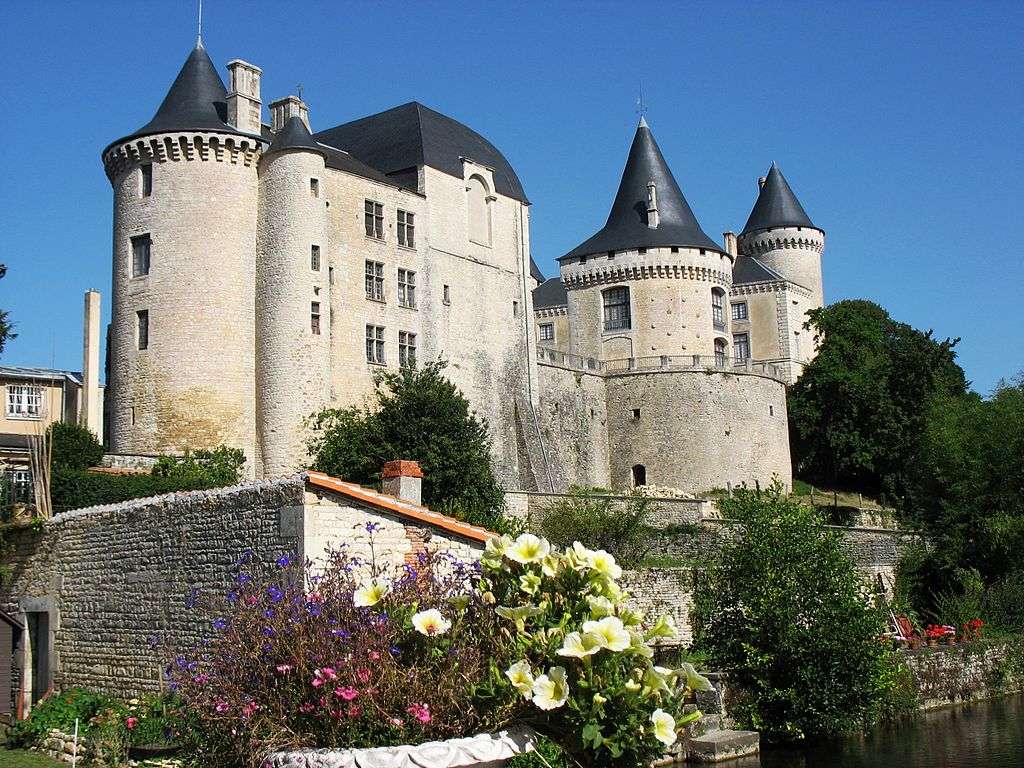 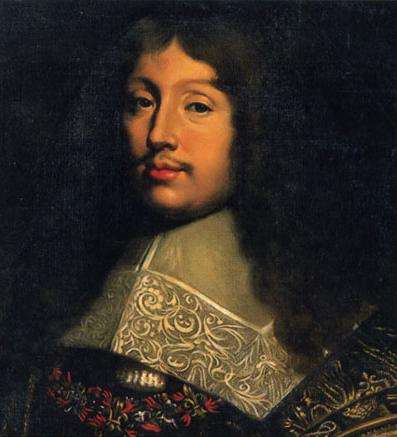 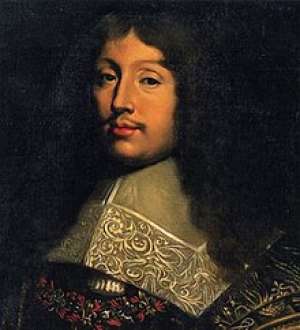 We are so accustomed to disguise ourselves to others, that in the end, we become disguised to ourselves.

François VI, Duc de La Rochefoucauld, Prince de Marcillac  was a noted French moralist and author of maxims and memoirs. He is part of the literary movement of classicism and best known for his maxims. Although he only officially published his Memoirs and his Maxims, his literary production is dense.

Born in Paris in 1613, at a time when the royal court was vacillating between aiding the nobility and threatening it, he was considered an exemplar of the accomplished seventeenth century nobleman. Until 1650, he bore the title of Prince de Marcillac. His great-grandfather François III, count de La Rochefoucauld, was killed in the St. Bartholomew's Day massacre, being a Huguenot.

François de La Rochefoucauld was born on September 15, 1613, at Rue des Petits Champs, in Paris's 1st arrondissement neighborhood. La Rochefoucauld was given the education of a nobleman of his era, which concentrated on military exercises, hunting, court etiquette, elegance of expression and comportment, and a knowledge of the world. He was married at the age of fourteen to Andrée de Vivonne, a sixth cousin of Catherine de Vivonne, the future marquise de Rambouillet. Belonging to one of the most illustrious families of the French nobility, the young La Rochefoucauld, then prince of Marcillac, succeeded at the age of 16 1 May 1629 to his uncle Benjamin de La Rochefoucauld, count of Estissac, as camp master of the Estissac regiment.

He joined the army the following year and almost immediately established himself as a public figure. He fought bravely in the annual campaigns, though his actions were never formally recognised.

Under the patronage of Madame de Chevreuse, whom he met at this time, the first of the three celebrated women who influenced his life, he joined the service of Queen Anne of Austria. In one of Madame de Chevreuse's quarrels with Cardinal Richelieu and her husband, a scheme apparently was conceived by which La Rochefoucauld was to carry her off to Brussels on horseback. Other cabals against Richelieu once resulted in La Rochefoucauld being sentenced to eight days in the Bastille, and he was occasionally required to leave the Court, exiled to his father's estates. In the power vacuum following Richelieu's death in 1642, La Rochefoucauld among others took an active role in urging the queen and Condé to act together against Gaston, Duke of Orléans. However, the growing reputation of Mazarin impeded the ambition of the plotters, and La Rochefoucauld's 1645 liaison with Duchess of Longueville made him irrevocably a frondeur aristocratic rebel. He was a conspicuous figure in the siege of Paris, fought in many of the frequent military engagements, and was seriously wounded at the siege of Mardyke.

In the second Fronde, La Rochefoucauld allied himself with Condé. He used the occasion of his father's funeral in 1650 to urge the attending provincial nobility to help him attack the royalist garrison of Saumur. In the battle of the Faubourg Saint-Antoine, in 1652, he was shot through the head. It was feared that he would lose his sight, but he recovered after a year's convalescence.

For some years thereafter, he retired to his country estate of Verteuil. Although his fortune had been much reduced, in time he was able to restore it somewhat, thanks chiefly to the fidelity of Gourville, who had been in his service and who, passing into the service of Mazarin and of Condé, had acquired both wealth and influence. La Rochefoucauld did not return to court life until just before Mazarin's death, when Louis XIV was about to assume absolute power, and the aristocratic anarchy of the Fronde was over. He wrote his memoirs during this time, as did many of his prominent contemporaries.

Somewhat earlier, La Rochefoucauld had taken his place in the salon of Madeleine de Souvré, marquise de Sablé, a member of the Marquise de Rambouillet côterie, and the founder of a kind of successor to it, whose special literary work was the writing of Sentences and Maximes. In 1662, the Dutch firm House of Elzevir surreptitiously published what purported to be his memoirs, which brought him both trouble and fame. Many of his old friends were offended. These memoirs were not a faithful copy of what he had written, and while he hastened to deny their authenticity, this was not generally believed.

Three years later, in 1665, he anonymously published the Maximes maxims, which established his position among the men of letters of the time. At about the same date, his friendship with Marie-Madeleine Pioche de La Vergne, Comtesse de La Fayette began, which lasted for the rest of his life. The glimpses which we have of him henceforward are chiefly from the letters of Madame de Sévigné, and though they show him suffering from gout, are on the whole pleasant ones.

He had a circle of devoted friends and was recognized as a top-ranking moralist and man of letters. His son, the Prince de Marcillac, to whom he gave his titles and honors in 1671, enjoyed a considerable position at court. But above all La Rochefoucauld was recognized by his contemporaries, including the king, as an exemplar of the older noblesse, the nobility that existed under the great monarch before the brilliance of his reign faded. This reputation he has retained to the present day.

La Rochefoucauld's ethical views have given rise to attacks upon his works by pious moralists of later eras. Like his contemporaries, he saw politics as a chessboard for powerful players, rather than as a struggle of ideologies or a means for achieving broad social goals. He appears to have been unusually scrupulous in his personal conduct, and his lack of success in the aristocratic struggles arose more from this than from anything else.

His importance as a social and historical figure is overshadowed by his towering stature in French literature. His literary work consists of three parts—his Memoirs, the Maximes, and his letters.

The Memoirs are of high interest and literary merit. A book purporting to be La Rochefoucauld's memoirs was published in the Dutch Republic whence, despite the author's protest, it continued to be reprinted for some thirty years. It has now been proved to have been pieced together from the work of half a dozen men, with scarcely a third of it being La Rochefoucauld's. Some years after La Rochefoucauld's death, a new recension appeared, still largely adulterated but with some errors corrected. This work went unchallenged for more than a century. Only in 1817 did anything like a genuine, if still imperfect, edition appear.

However, the pithy, elegant Maximes maxims had no such fate. The author made frequent alterations and additions to them during his life and a few were added after his death. It is usual now to publish them in their totality of 504. The majority consist of just two or three lines, and hardly any exceed half a page. La Rochefoucauld reflects on the conduct and motives of mankind, from the point of view of a man of the world who intends not to sugar-coat his observations. In fact, in his introduction, he advises,

...the best approach for the reader to take would be to put in his mind right from the start that none of these maxims apply to himself in particular, and that he is the sole exception, even though they appear to be generalities. After that I guarantee that he will be the first to endorse them and he will believe that they do credit to the human spirit.

Here are a few examples:

II. Self-love is the greatest of all flatterers.

VIII. Sincere enthusiasm is the only orator who always persuades. It is like an art the rules of which never fail; the simplest man with enthusiasm persuades better than the most eloquent with none.

XIV. Men are not only subject to losing all recollection of kindnesses and injuries done them, they even hate those to whom they are obliged and cease to hate those who have harmed them. The effort of repaying the kindness and avenging the evil seem to them a servitude to which they are unwilling to submit.

CCLXI. Flirtatiousness is fundamental to a woman's nature, but not all put it into practice because some are restrained by fear or by good sense.

CDXI. There hardly exist faults which are not more pardonable than the means by which one tries to hide them.

Referenced by Bernard Lonergan in Insight, People generally complain about their memory, but never about their judgment.

His letters number more than one hundred, and they are of both biographical and literary value.

La Rochefoucauld's thoughts on human nature concern, among a broad range of topics, pride and self-love, vanity, the passions and the emotions, love, sincerity, conversation, and politics.

Nearly all the great French critics of the 19th century wrote to some extent about La Rochefoucauld.

Philosopher Friedrich Nietzsche greatly admired La Rochefoucauld and was influenced not only by his ethics, but also his style.

Previous editions were superseded by that of Jean Désiré Louis Gilbert and Jules Gourdault 1868–1883, in the series Grands Écrivains de la France, 3 vols.

A separate edition of the Maximes is the so-called Édition des bibliophiles 1870. See also the English translation of The Moral Maxims and Reflections of the Duke De La Rochefoucauld by George H. Powell 1903. 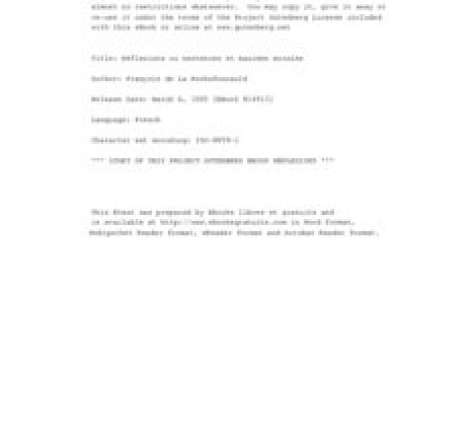 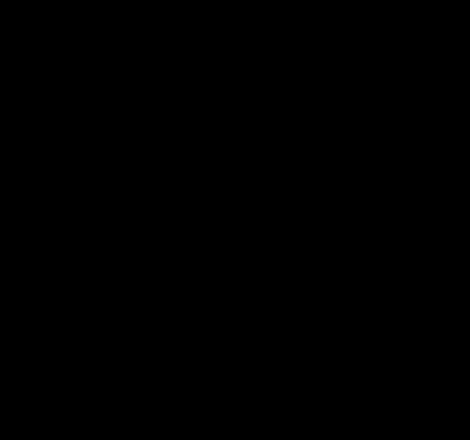 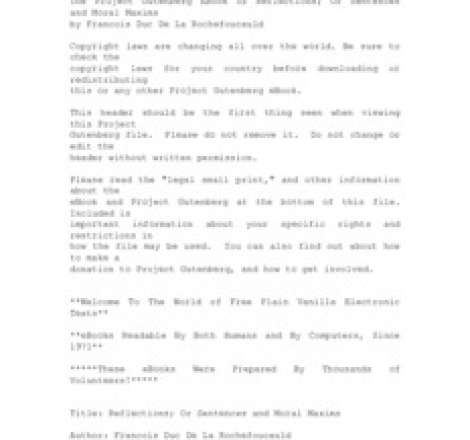 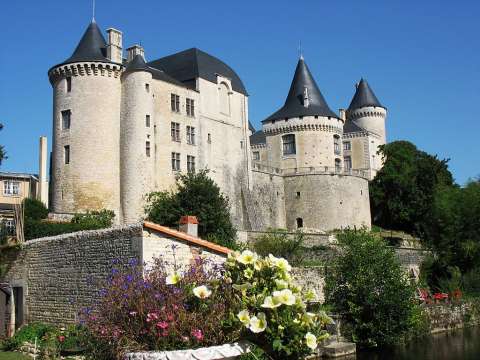 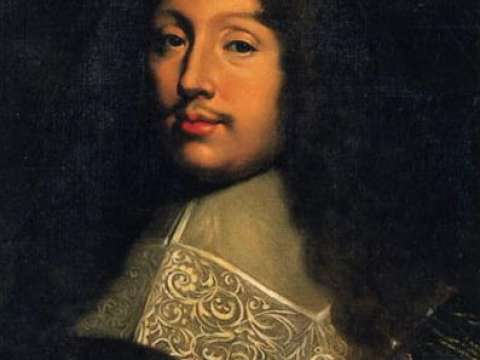 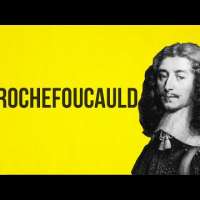 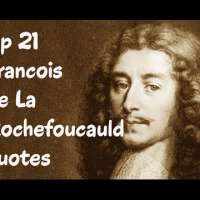 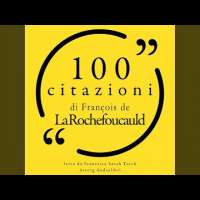 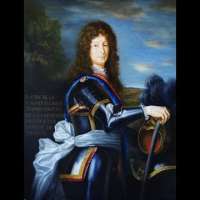 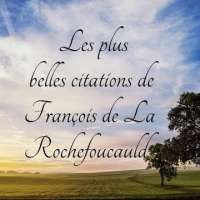 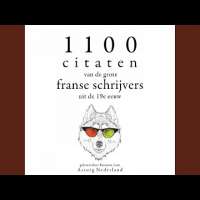 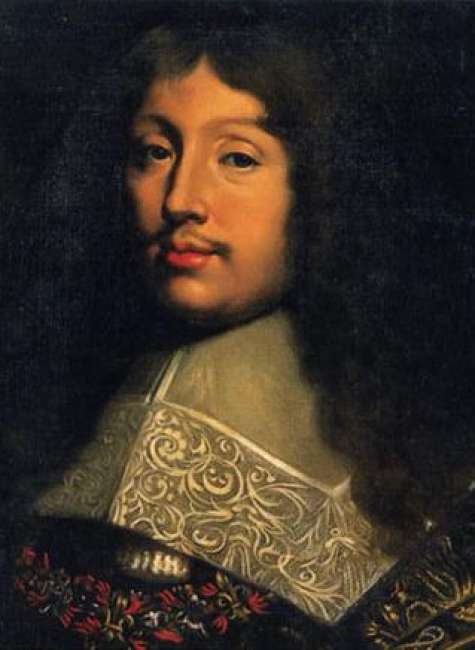 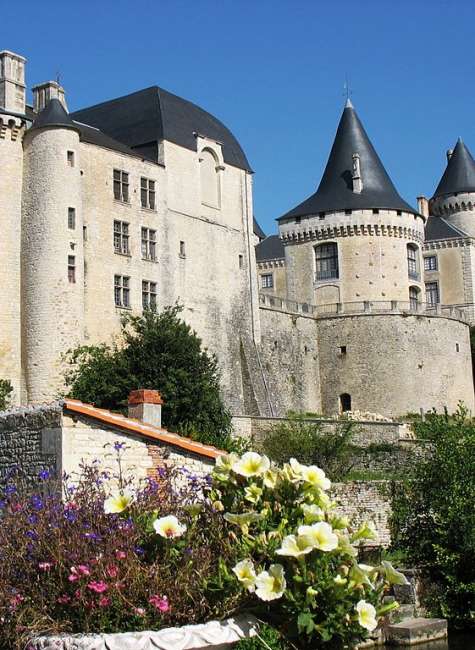