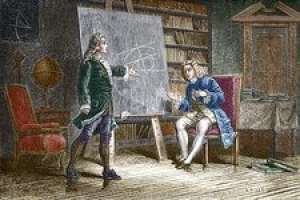 James Bernoulli is the first member of the celebrated family of this name who is associated with the history of Mathematics.

His father, Nickolaus Bernoulli, was descended from four generations of prosperous merchants and pharmacists; James’s mother, Margaretha Schönauer, was the daughter of a banker. Both parents’ families were prominent in local politics.

Like his younger brother, John, James abandoned the discipline chosen for him by his father — theology—and devoted himself to the study of mathematics, physics, and astronomy. James traveled extensively throughout Europe, where he met with the best scholars of his time, then returned to Switzerland in 1682. He secured a position as a professor of mathematics at the University of Basel in 1687, a post he held until his death in 1705.

James and John were among the first to recognize the potential of the calculus, particularly as developed by Leibniz, and were its most zealous proponents. Working together, the Bernoullis successfully applied the analytical power of the calculus to such difficult problems as the nature of the isochronous curve and the form of a wind-filled sail.

The brothers are acknowledged to have been, after Newton and Leibniz, the most important founders of the calculus. Among James’s individual contributions are the invention of polar coordinates; the discovery of the equations of several curves, including the lemniscate, the tractrix, and the logarithmic spiral; and advances in algebra and the calculus of variations.

James Bernoulli’s most significant achievement was his Ars Conjectandi, or The Arts of Conjecturing. Published posthumously in 1713, the Ars Conjectandi is the cornerstone of modern probability theory. Though its fundamental principles were first proposed by Pascal and Fermat, Bernoulli’s elegant and comprehensive treatment dramatically advanced the accuracy and impact of the calculus of probabilities.