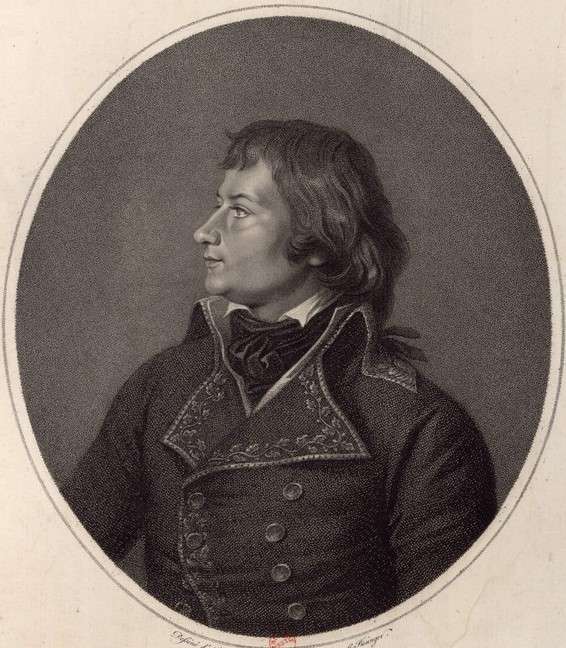 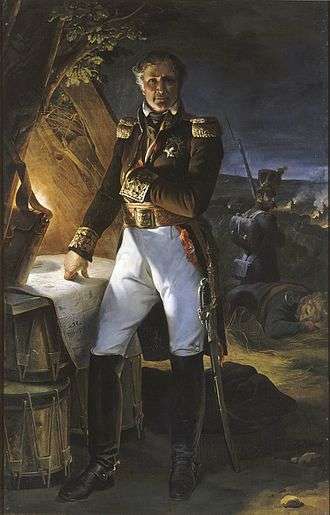 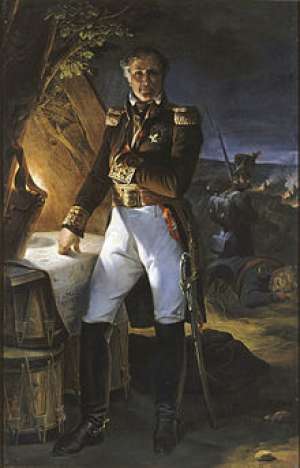 Laurent de Gouvion Saint-Cyr, 1st Marquis of Gouvion-Saint-Cyr 1 was a French commander in the French Revolutionary and Napoleonic Wars who rose to Marshal of the Empire and Marquis.

He was born Laurent Gouvion in Toul, Three Bishoprics now Meurthe-et-Moselle, the eldest child of Jean-Baptiste Gouvion, a tanner, and his wife Anne-Marie Mercier. He adopted the name Saint-Cyr after his mother, who had abandoned him at an early age.

He went to Rome when he was eighteen in order to study painting, but, although he continued his artistic studies after his return to Paris in 1784, he never adopted the profession of a painter.

In 1792 he was chosen a captain in a volunteer battalion, and served on the staff of General Custine. Promotion rapidly followed, and in the course of two years he rose to chef de brigade, général de brigade and général de division. He commanded the centre division of Jean Victor Marie Moreau's army in the Rhine Campaign of 1796, aiding in the celebrated retreat from Bavaria to the Rhine.

In 1798 he succeeded André Masséna in the command of the army of Italy. In the following year he commanded the left wing of Jean-Baptiste Jourdan's army fighting in Germany; when Jourdan was succeeded by Masséna, he joined the army of Moreau in Italy, where he distinguished himself in face of the great difficulties that followed the defeat of Novi. Moreau disliked Saint-Cyr for his sense of righteousness and incorruptibility. Rumours were soon spreading that Saint-Cyr was a "bad bed fellow". Moreau also accused him of not supporting his brother generals though General Ney and Davout often thanked him for support after battles. When Moreau, in 1800, was appointed to the command of the army of the Rhine, Gouvion Saint-Cyr was named his principal lieutenant, and on 9 May gained a victory over General Kray at Biberach. He was not, however, on good terms with his commander and retired to France after the first operations of the campaign.

In 1801 he was sent to Spain to command the army intended for the invasion of Portugal see War of the Oranges, and was named grand officer of the Legion of Honour. When a treaty of peace was shortly afterwards concluded with Portugal, he succeeded Lucien Bonaparte as ambassador at Madrid.

Saint-Cyr was a stoic in an age of pragmatism and glory. His refusal to sign the proclamation of congratulation for declaring the birth of the empire resulted in his name not being included in the first list of Napoleonic Marshals, while commanders such as Lannes, Bessières and Soult who had not had independent command experience were included. For the whole of his life Saint-Cyr believed that Napoleon deliberately refused him troops just to disgrace him. In 1803 he was appointed to the command of an army corps in Italy, in 1805 he served with distinction under Masséna, and in 1806 he was engaged in the campaign in southern Italy. When he returned to Paris to protest his treatment in Naples, Napoleon sent him back to his post on pain of death. He took part in the 1807 campaigns in Prussia and Poland, and in 1808, in which year he was made a count, he commanded an army corps in Catalonia; but, not wishing to comply with certain orders he received from Paris, he resigned his command and remained in disgrace till 1811.

He was still a général de division, having been excluded from the first list of marshals. On the opening of the Russian campaign, Saint-Cyr received command of the VI Corps, and on 18 August 1812 won a victory over the Russians at Polotsk, in recognition of which he was made a marshal. The Russians, under Barclay de Tolly, were burning everything as they retreated back towards Moscow, and had just burned nearby Smolensk. It was just prior to the victory at Polotsk on the banks of the Daugava river, however, that Oudinot was wounded, and thus Saint-Cyr assumed his command.

In October 1812 Saint-Cyr was driven out of Polotsk. He received a severe wound in one of the battles during the general retreat. Saint-Cyr distinguished himself at the battle of Dresden 26–27 August 1813 and in the defence of that place against the Allies after the battle of Leipzig, capitulating only on 11 November, when Napoleon had retreated to the Rhine. In this year, Saint Cyr's relation with the Emperor warmed as Napoleon commented that Saint Cyr had no match in all of the marshalate and was the equal of Napoleon himself in defence. On the day he received his long overdue baton he wrote a lengthy letter to his wife and true to his character he devoted only one line to his promotion.

On the Bourbon Restoration he was created a Peer of France, and in July 1815 was appointed War Minister, but resigned his office in the following November. During this appointment he tried to assist long-time friend and fellow marshal Michel Ney by providing him a jury of four other Napoleonic Marshals, but was disgraced when Marshal Moncey refused to even sit in it. In June 1817 he was appointed Marine Minister a pretext for him to resume the place of War Minister, which he did in September and continued to discharge till November 1819. During this time he initiated many reforms, particularly in respect of measures tending to make the army a national rather than a dynastic force. He made efforts to safeguard the rights of veteran soldiers of the Empire, organized the General Staff, and revised the code of military law and the pension regulations. He was made a marquess in 1817. Laurent de Gouvion-Saint-Cyr died on 17 March 1830 in Hyères, a town in the southeast of France.

Marshal Saint-Cyr is mentioned in Joseph Conrad's short story "The Duel" as well as Ridley Scott's film adaptation The Duellists as the commander of Armand d'Hubert after the second and final restoration of Louis XVIII as King of France. 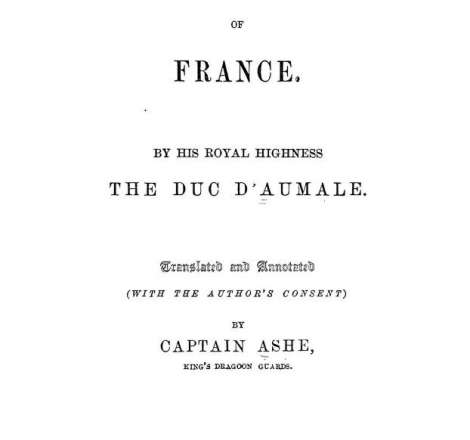 military
The military institutions of France 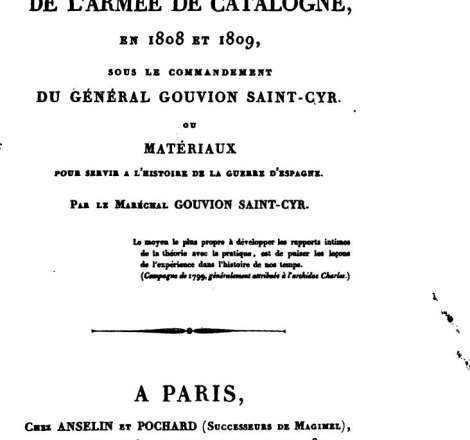 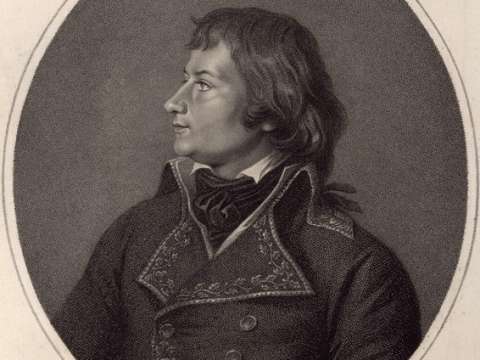 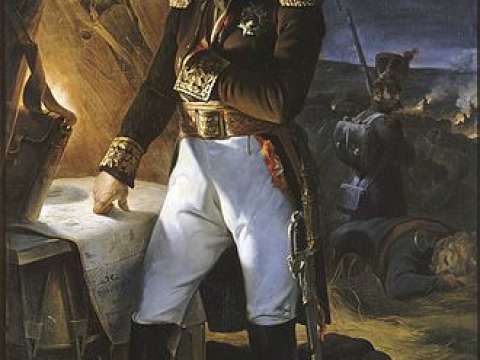 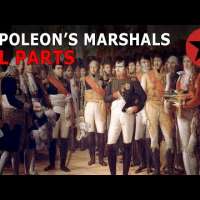 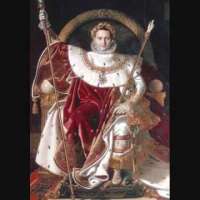 Tribute to Napoleon's Marshals and Commanders of France 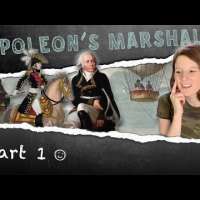 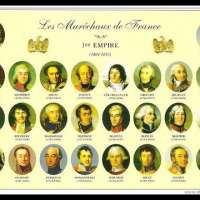 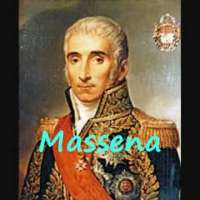 Napoleon's Marshals: From all walks of life
What Do You Think Of That Genius?