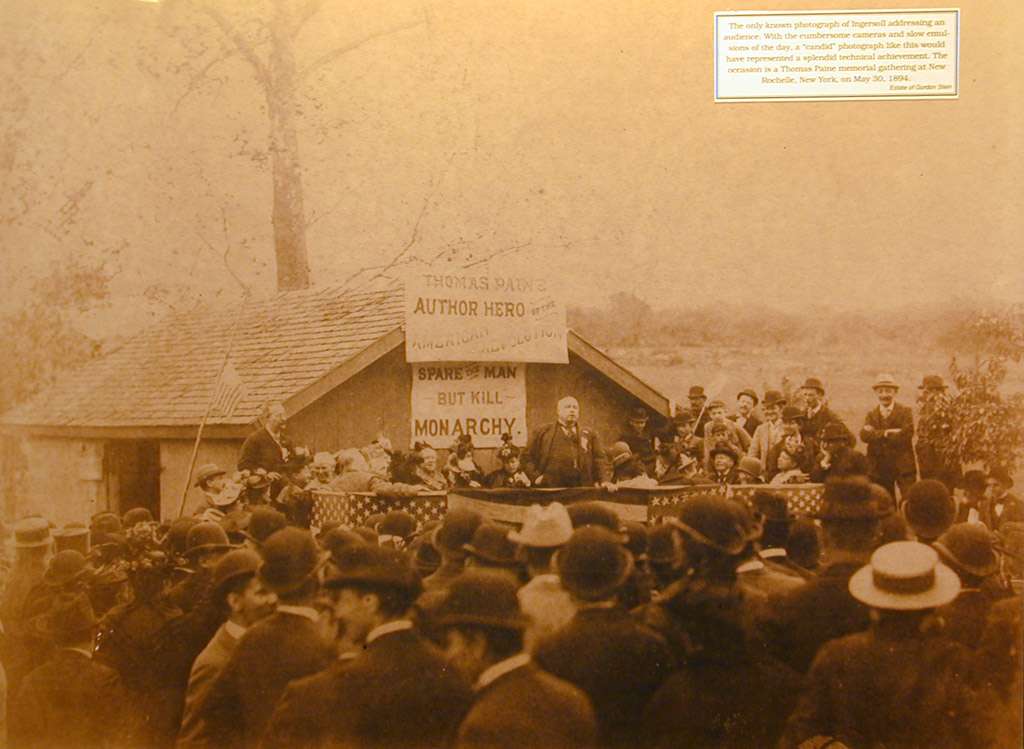 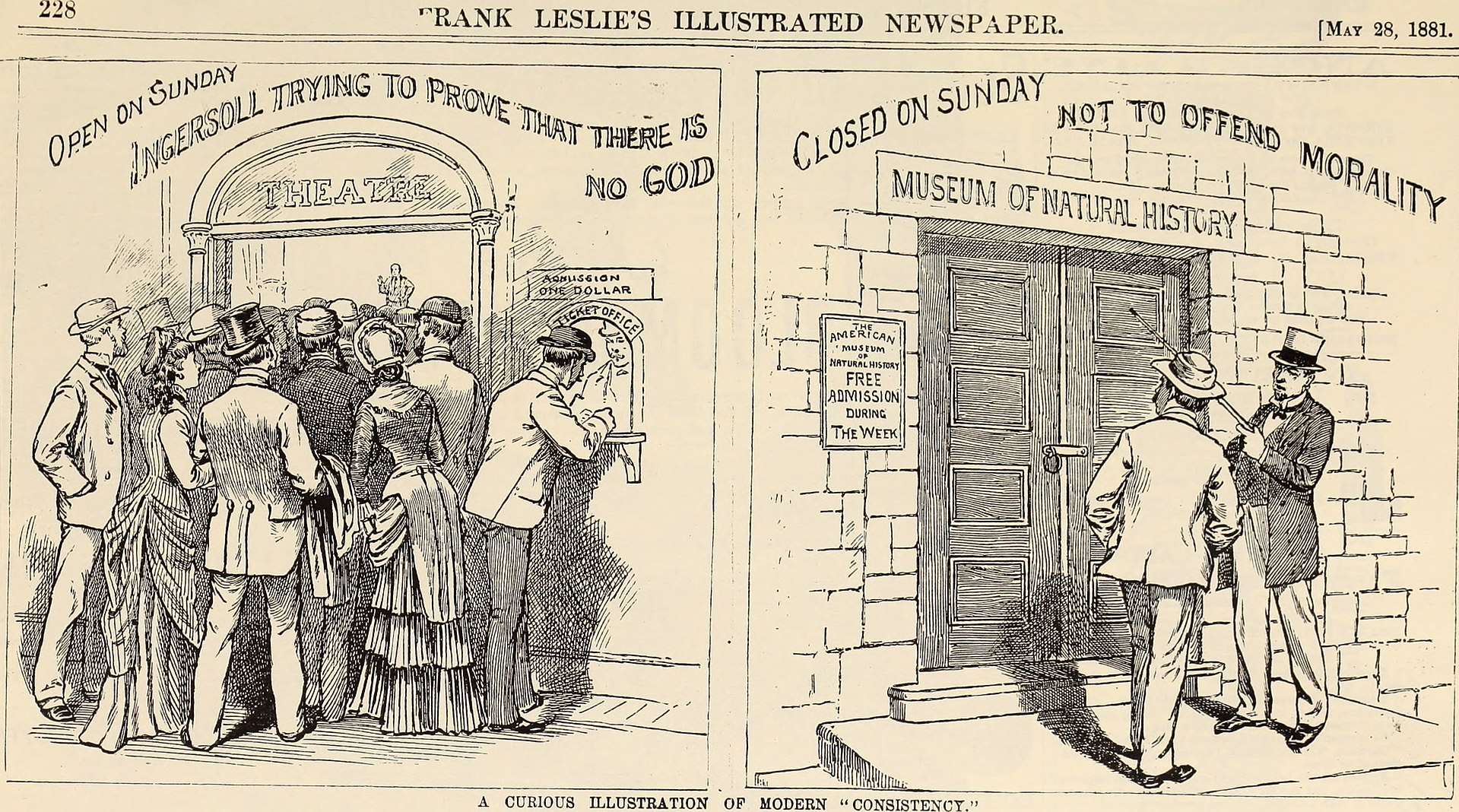 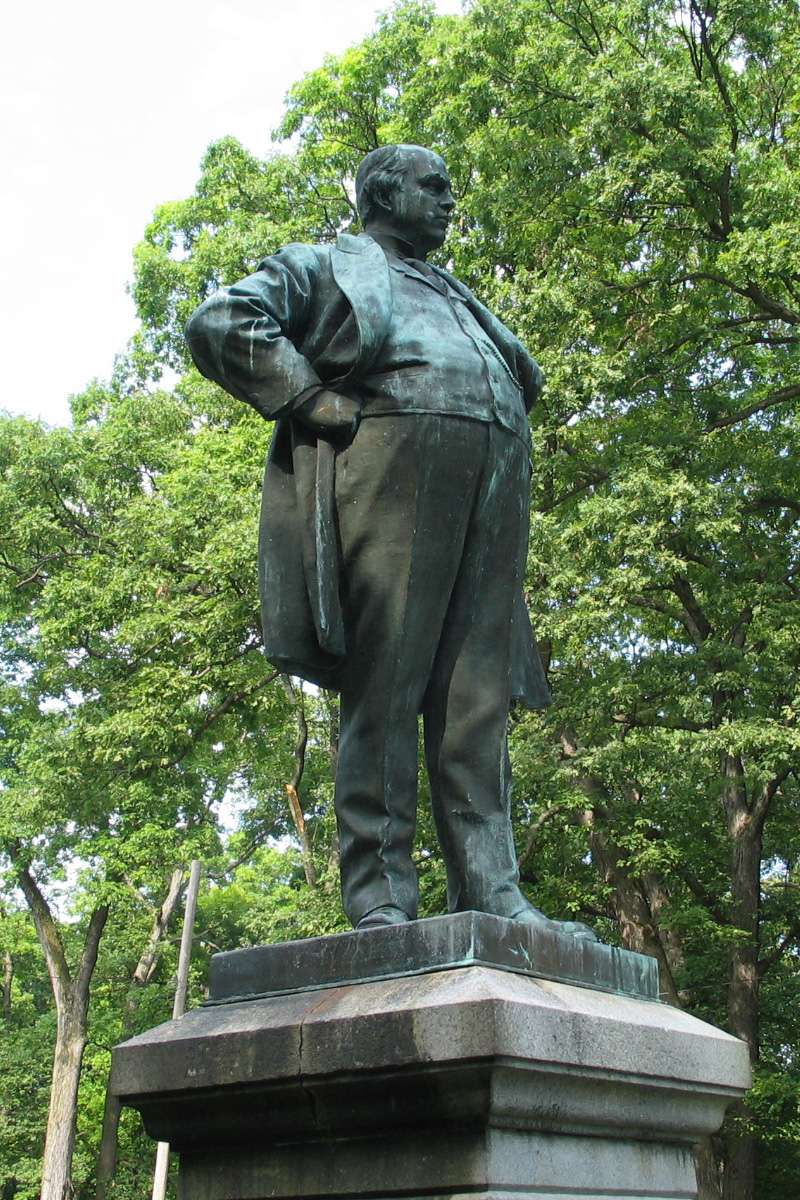 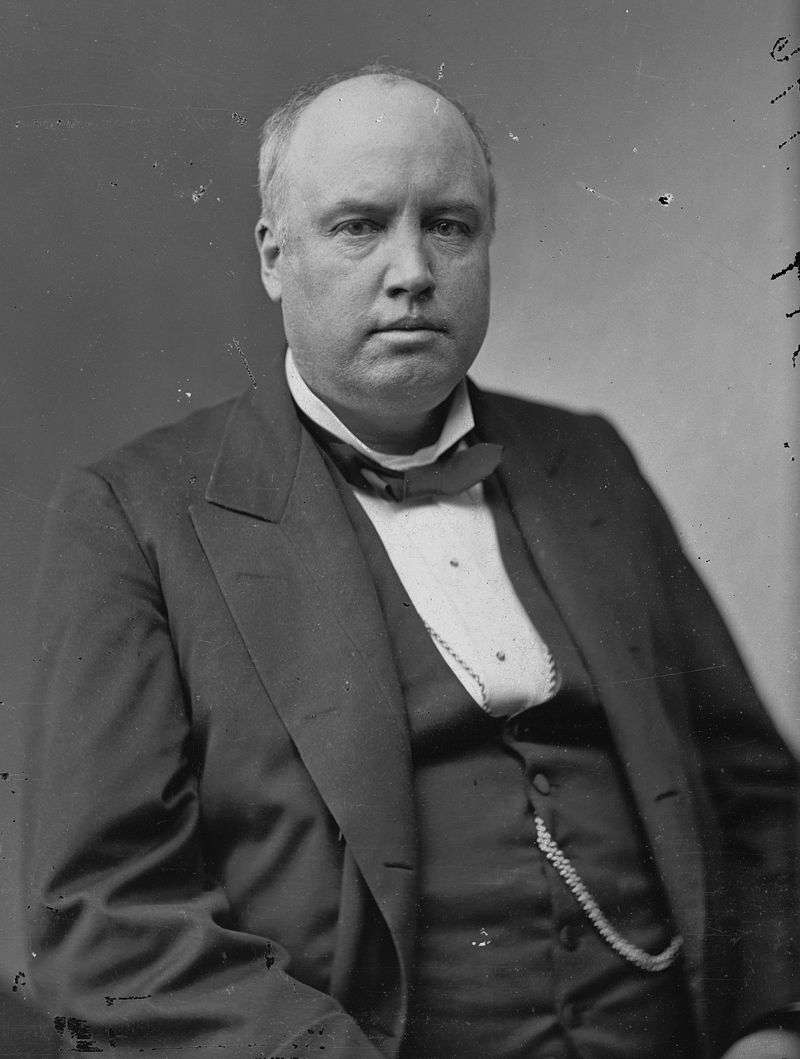 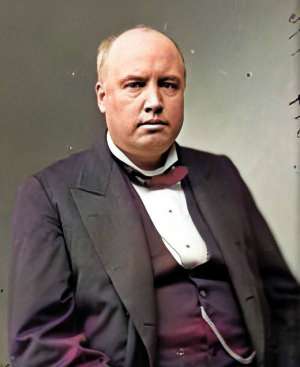 This is my doctrine: Give every other human being every right you claim for yourself.

Robert Green Ingersoll was an American writer and orator during the Golden Age of Free Thought, who campaigned in defense of agnosticism. He was nicknamed "The Great Agnostic".

Robert Ingersoll was born in Dresden, Yates County, New York. His father, John Ingersoll, was an abolitionist-sympathizing Congregationalist preacher, whose radical opinions caused him and his family to relocate frequently. For a time, Rev. John Ingersoll substituted as preacher for American revivalist Charles G. Finney while Finney was on a tour of Europe. Upon Finney's return, Rev. Ingersoll remained for a few months as co-pastor/associate pastor with Finney. The elder Ingersoll's later pastoral experiences influenced young Robert negatively, however, as The Elmira Telegram described in 1890:

Though for many years the most noted of American infidels, Colonel Ingersoll was born and reared in a devoutly Christian household. His father, John Ingersoll, was a Congregationalist minister and a man of mark in his time, a deep thinker, a logical and eloquent speaker, broad minded and generously tolerant of the views of others. The popular impression which credits Ingersoll's infidelity in the main to his father's severe orthodoxy and the austere and gloomy surroundings in which his boyhood was spent is wholly wrong. On the contrary, the elder Ingersoll's liberal views were a source of constant trouble between him and his parishioners. They caused him to frequently change his charges, and several times made him the defendant in church trials. His ministerial career was, in fact, substantially brought to a close by a church trial which occurred while he was pastor of the Congregational Church at Madison, Ohio, and at which his third wife appeared as the prosecutor. Upon this occasion, he was charged with prevarication and unministerial conduct. The evidence adduced – the trial is one of the abiding traditions of the dull little town of Madison – was of the most trivial and ridiculous character, but the committee which heard it decided that, though he had done "nothing inconsistent with his Christian character," he was "inconsistent with his ministerial character," and forbade him to preach in the future. Elder John went before the higher church authorities and was permitted to continue his clerical labors. However, he soon removed to Wisconsin, going from there to Illinois, where he died. The Madison trial occurred when young Robert was nine years old, and it was the unjust and bigoted treatment his father received which made him the enemy, first of Calvinism, and later of Christianity in its other forms.

During 1853, "Bob" Ingersoll taught a term of school in Metropolis, Illinois, where he let one of his students, the future Judge Angus M. L. McBane, do the "greater part of the teaching, while Latin and history occupied his own attention". At some time prior to his Metropolis position, Ingersoll had also taught school in Mount Vernon, Illinois.

Later that year, the family settled in Marion, Illinois, where Robert and his brother Ebon Clarke Ingersoll were admitted as lawyers during 1854. A county historian writing 22 years later noted that local residents considered the Ingersolls as a "very intellectual family; but, being Abolitionists, and the boys being deists, rendered obnoxious to our people in that respect."

While in Marion, he learned law from Judge Willis Allen and served as deputy clerk for John M. Cunningham, Williamson County's County Clerk and Circuit Clerk. During 1855, after Cunningham was named registrar for the federal land office in southeastern Illinois at Shawneetown, Illinois, Ingersoll followed him to the riverfront city along the Ohio River. After a brief time there, he accepted the deputy clerk position with John E. Hall, the county clerk and circuit clerk of Gallatin County, and also a son-in-law of John Hart Crenshaw. On November 11, 1856, Ingersoll caught Hall in his arms when the son of a political opponent assassinated his employer in their office.

When he relocated to Shawneetown, he continued to practice law with Judge William G. Bowman who had a large library of both law and the classics. In addition to his job as a clerk, he and his brother began their law practice using the name "E.C. and R.G. Ingersoll". During this time they also had an office in Raleigh, Illinois, then the county seat of neighboring Saline County. As attorneys following the court circuit he often practiced alongside Cunningham's soon-to-be son-in-law, John A. Logan, the state's attorney and political ally to Hall.

With his earlier mentor Cunningham having relocated back to Marion after the land office's closing during 1856, and Logan's relocation to Benton, Illinois, after his marriage that autumn, Ingersoll and his brother relocated to Peoria, Illinois, where they finally settled during 1857.

Ingersoll was married, February 13, 1862, to Eva Amelia Parker 1841-1923. They had two daughters. The elder daughter, Eva Ingersoll-Brown, was a renowned feminist and suffragist.

With the beginning of the American Civil War, he raised the 11th Regiment Illinois Volunteer Cavalry of the Union Army and assumed command. The regiment fought in the Battle of Shiloh. Ingersoll was later captured in a skirmish with the Confederates near Lexington, Tennessee on December 18, 1862, then paroled - i.e. released on his oath that he would not fight again against the Confederate States of America until formally exchanged for a captured Confederate soldier or officer of like rank who was often under parole himself, making the practice a matter of honor and formality, which could be extended to individuals or even entire regiments en masse. This was an old practice which was still commonly observed early in the war, until the Dix–Hill Cartel broke down under political distress. Unable to perform his duties under his officer's commission while paroled, he tendered his resignation as commanding officer on June 30, 1863.

After the war, he served as Illinois Attorney General. He was a prominent member of the Republican Party and, though he never had an elected job, he was nonetheless an active participant of politics. According to Robert Nisbet, Ingersoll was a "staunch Republican." His speech nominating James G. Blaine for the 1876 presidential election was unsuccessful, as Rutherford B. Hayes received the Republican nomination, but the speech itself, known as the "Plumed Knight" speech, was considered a model of political oratory. His opinions on slavery, woman's suffrage, and other issues of the time would sometimes become part of the mainstream, but his atheism/agnosticism effectively prevented him from ever pursuing or having political offices higher than that of state attorney general. Illinois Republicans tried to persuade him to campaign for governor on the condition that Ingersoll conceal his agnosticism during the campaign, which he refused to do.

Ingersoll was involved with several major trials as an attorney, notably the Star Route trials, a major political scandal in which his clients were acquitted. He also defended a New Jersey man charged with blasphemy. Although he did not win the acquittal, his vigorous defense is considered to have discredited blasphemy laws and few other prosecutions followed.

Ingersoll was one of the most popular orators of the age, when oratory was public entertainment. He spoke on every subject, from Shakespeare to Reconstruction, but his most popular subjects were agnosticism and the sanctity and refuge of the family. He committed his speeches to memory although they were sometimes more than three hours long.

Many of Ingersoll's speeches advocated freethought and humanism, and often ridiculed religious belief. For this the press often attacked him, but neither his opinions nor the negative press could stop his increasing popularity. During Ingersoll's greatest fame, audiences would pay $1 or more to hear him speak, a considerable sum for that time.

In a lecture entitled "The Great Infidels", he attacked the doctrine of Hell: "All the meanness, all the revenge, all the selfishness, all the cruelty, all the hatred, all the infamy of which the heart of man is capable, grew blossomed, and bore fruit in this one word – Hell."

Ingersoll died from congestive heart failure at the age of 65. Soon after his death, his brother-in-law, Clinton P. Farrell, collected copies of Ingersoll's speeches for publication. The 12-volume Dresden Editions kept interest in Ingersoll's ideas alive and preserved his speeches for future generations. Ingersoll's ashes are interred in Arlington National Cemetery.

Susan Jacoby credits Ingersoll for the revival of Thomas Paine's reputation in American intellectual history, which had decreased after the publication of The Age of Reason published during 1794–95. Paine postulated that men, not God, had written the Bible, and Ingersoll included this work in his lectures on freethinking. As the only freethinker of his time with a wide audience outside of the unbelieving circle, he reintroduced Paine's ideas to a new generation.

In 2005, a popular edition of Ingersoll's work was published by Steerforth Press. Edited by the Pulitzer Prize-winning music critic Tim Page, What's God Got to Do With It: Robert Ingersoll on Free Speech, Honest Talk and the Separation of Church and State brought Ingersoll's thinking to a new audience.

Ingersoll enjoyed a friendship with the poet Walt Whitman, who considered Ingersoll the greatest orator of his time. "It should not be surprising that I am drawn to Ingersoll, for he is 'Leaves of Grass' ... He lives, embodies, the individuality, I preach. I see in Bob the noblest specimen—- American-flavored—- pure out of the soil, spreading, giving, demanding light."

The feeling was mutual. Upon Whitman's death during 1892, Ingersoll delivered the eulogy at the poet's funeral. The eulogy was published to great acclaim and is considered a classic panegyric. 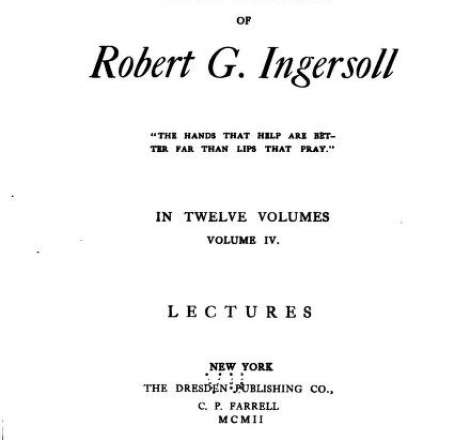 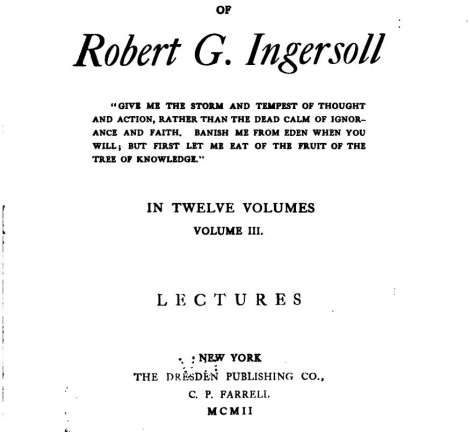 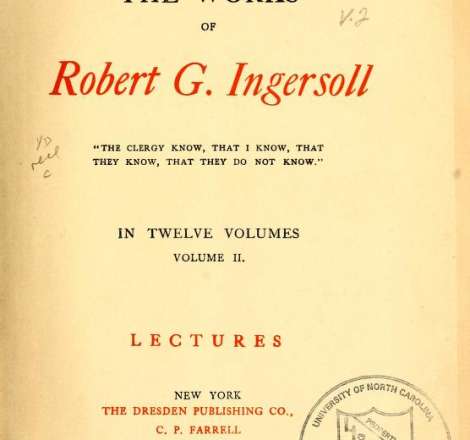 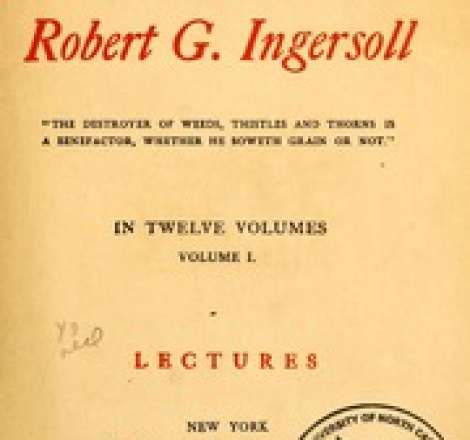 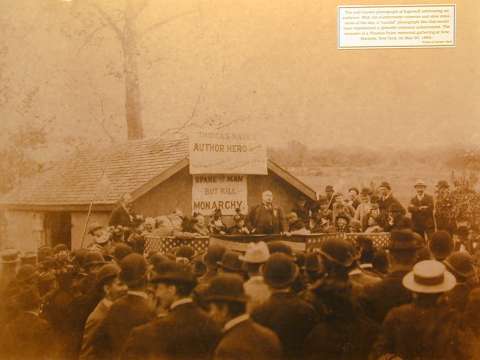 The only known image of Ingersoll addressing an audience. 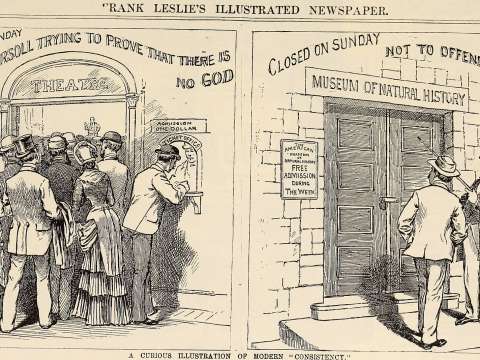 A political cartoon depicting crowds seeking entertainment by flocking to hear Ingersoll advocate for agnosticism in a theater which is open on Sunday, when the American Museum of Natural History is closed so as "Not to Offend Morality". 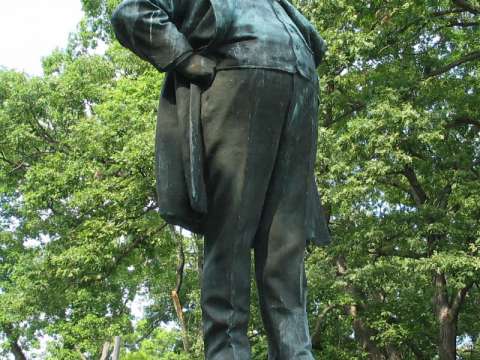 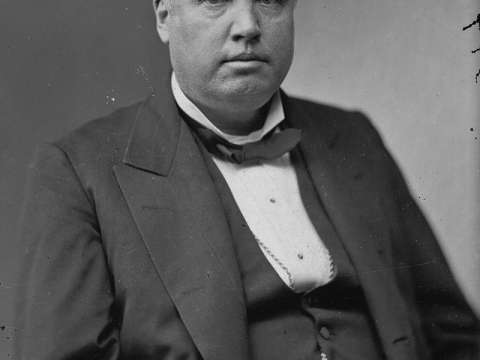 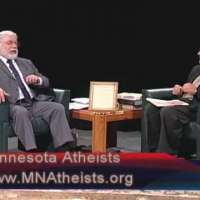 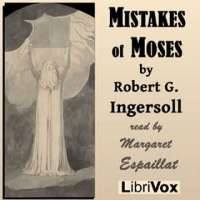 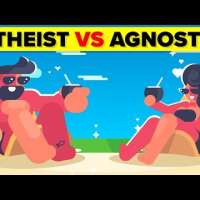 Atheist VS Agnostic - How Do They Compare & What's The Difference? 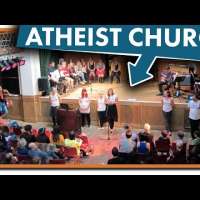 The Rise of Atheist Churches? 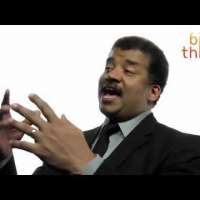 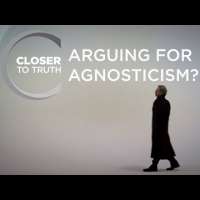 Arguing for Agnosticism? | Episode 610 | Closer To Truth
What Do You Think Of That Genius? 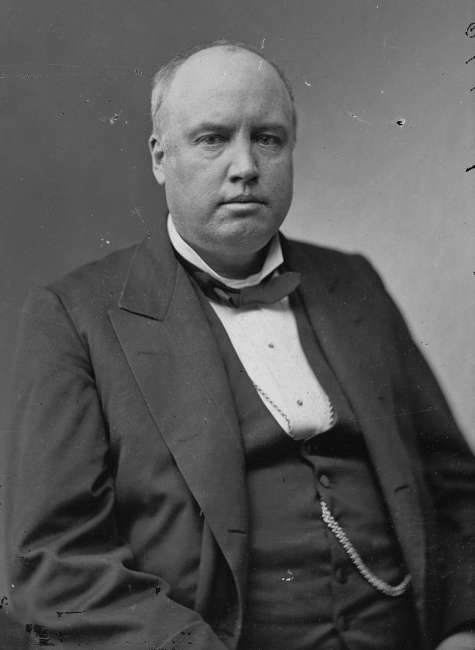