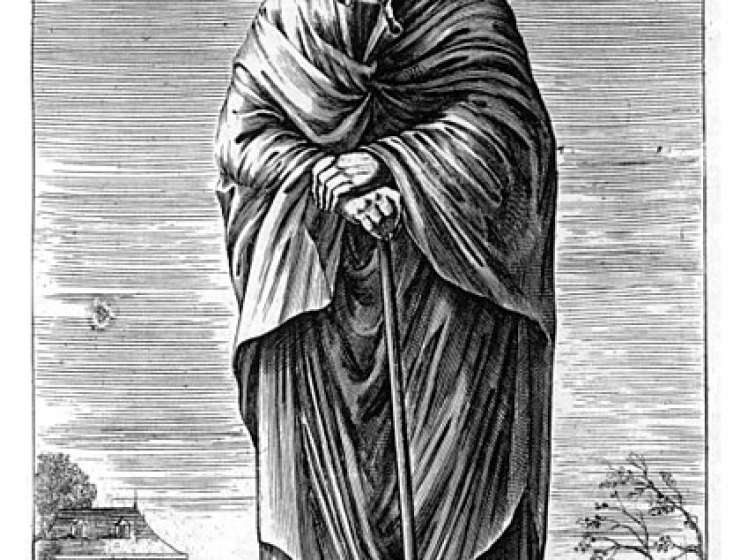 Xenophanes of Colophon (l.c. 570-c.478 BCE) is known as one of the Pre-Socratic philosophers of ancient Greece, so-called because they pre-date Socrates (l. c. 470/469-399 BCE), recognized as the Father of Western Philosophy. The Pre-Socratics initiated philosophical inquiry in ancient Greece starting in the 6th century BCE with Thales of Miletus (l. c. 585 BCE) who is understood as the first to ask "What is the basic 'stuff' of the universe?" (Baird, 8). In asking this question, Thales was departing from the cultural understanding that the gods had created the world and sustained it. Thales seems to have believed that there was another, natural, answer to the creation of the world and how it continued to function.

Thales claimed the First Cause of existence was water because it could assume different forms of matter (heated, it became vapor, frozen, it became ice). His inquiries inspired his student Anaximander (l.c. 610-546 BCE) to pursue the same course. Anaximander believed that the First Cause was the apeiron, a cosmic creative force which continuously brought opposites together in making new forms. His efforts inspired Anaximenes, possibly his student, to suggest that air was the First Cause in that it sustained life and, like water, also was able to take different forms.

By this progression, the Pre-Socratics moved from an investigation of the force (or matter) which began existence to the wider and deeper exploration of how best to live one's life exemplified in the works of Plato (l. 428/427-348/347 BCE) and his student Aristotle of Stagira (l. 384-322 BCE) who established the foundation of Western philosophy.