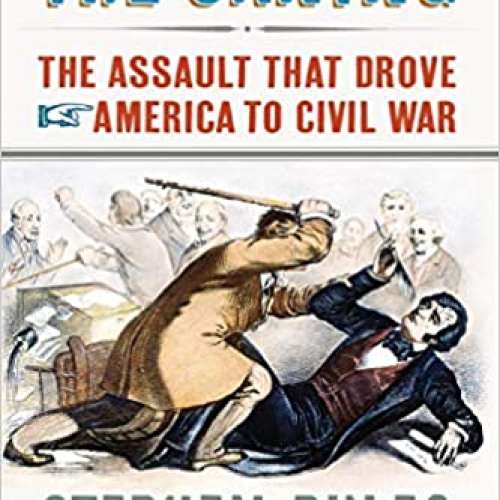 116
0
To genius page →
The Caning: The Assault That Drove America to Civil War

A Turning Point in American History, the Beating of U.S. Senator Charles Sumner and the Beginning of the War Over Slavery
Early in the afternoon of May 22, 1856, ardent pro-slavery Congressman Preston S. Brooks of South Carolina strode into the United States Senate Chamber in Washington, D.C., and began beating renowned anti-slavery Senator Charles Sumner with a gold-topped walking cane. Brooks struck again and again—more than thirty times across Sumner’s head, face, and shoulders—until his cane splintered into pieces and the helpless Massachusetts senator, having nearly wrenched his desk from its fixed base, lay unconscious and covered in blood. It was a retaliatory attack. Forty-eight hours earlier, Sumner had concluded a speech on the Senate floor that had spanned two days, during which he vilified Southern slaveowners for violence occurring in Kansas, called Stephen A. Douglas of Illinois a “noise-some, squat, and nameless animal,” and famously charged Brooks’s second cousin, South Carolina Senator Andrew Butler, as having “a mistress. . . who ugly to others, is always lovely to him. . . . I mean, the harlot, Slavery.” Brooks not only shattered his cane during the beating, but also destroyed any pretense of civility between North and South.