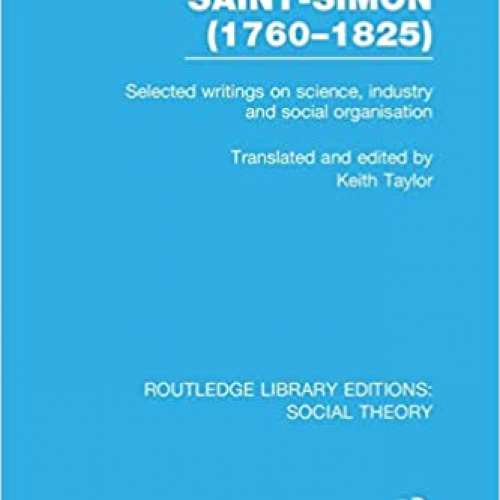 Keith Taylor has undertaken a thorough study of the full range of writings by the brilliant French thinker Henri Saint-Simon (1760–1825), including his unpublished manuscripts, and the result is the first comprehensive and truly representative selection in English from the works of this founding father of social science and socialism, whose ideas exerted a formative influence on such major and diverse intellectual figures as Comte, Proudhon, Marx and Engels, Herzen, Carlyle and Durkheim. When Saint-Simon's writings first appeared, they aroused little more than amusement and curiosity. The ideas they contained – ideas concerning the application of scientific method to the study of man and society, the coming of the new 'scientific-industrial' age in which the State would assume responsibility for promoting social welfare, the prospects for international cooperation and integration in Europe, man's need for a secular religion – were widely dismissed. But the boldness and originality of Saint-Simon's work had a lasting impact on subsequent thinkers and played a major role in the development of European social thought throughout the nineteenth and into the twentieth centuries.