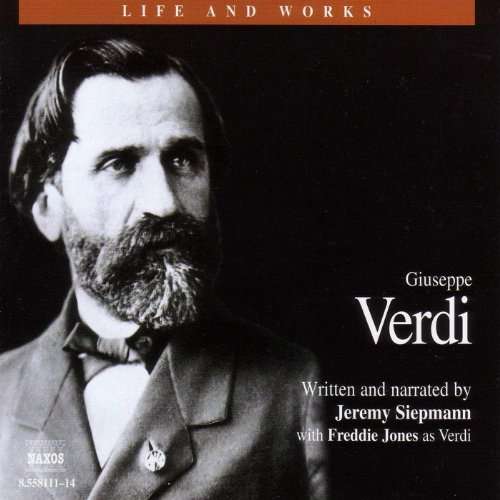 With the possible exception of Mozart, Verdi is the most popular opera composer who ever lived. Quite early in his career his tunes were being cranked out by barrel organs throughout Europe and were well known to many who may never even have heard his name. But the complex man behind them remains elusive and puzzling.

In this portrait-in-sound, Jeremy Siepmann and a group of distinguished actors take an in-depth look behind the popular image of a man who was, and perhaps remains, the most enduring national hero in Italian history and a colossus in the history of music itself.

Here, Verdi comes alive through an utterly committed portrayal by Freddie Jones. The composer’s larger-than-life personality, with all its self-indulgent outbursts and irresistible expressions of artistic genius, is here conveyed in a unique and touching way. We can follow his path, as exemplary passages of music are smoothly intermingled with spoken text. Jeremy Siepmann’s narration is enthralling and detailed, and the character behind this most fervently Italian music is fascinating to discover.