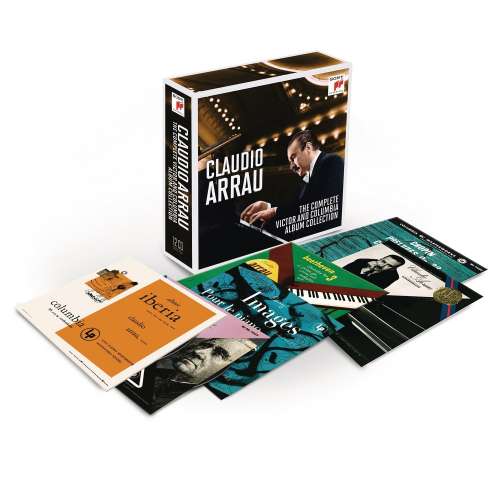 These recordings reflect how Arrau s textually scrupulous yet highly personal mastery of many styles had matured and ripened, while retaining the fire and ardency of his youth. Arrau s Mozart, Weber and Chopin probe beyond the music s surface charm, as do the luminous and full-bodied Spanish and French Impressionist selections. Cumulative momentum and thoughtful detail characterize Arrau s Beethoven and Schumann while the extraordinary technical finish of his Liszt transcends mere virtuosity and bravura.

Claudio Arrau (1903 1991) was a singular figure among the great pianists of his time, who strived to fuse the best that nineteenth- and twentieth-century performing traditions had to offer. Arrau s 1941 1952 American recordings for Victor and Columbia represent the pianist on prime form at one of the peaks of his long career. Sony brings this body of work together for the first time in a comprehensive edition, vividly remastered from the original sources.

Born in Chillán, Chile, on February 6, 1903, Arrau gave his first recital at five. Three years later the Chilean government awarded the prodigy a ten-year grant to study in Germany. Martin Krause, one of Liszt s last pupils, nurtured the young pianist, gave him daily lessons, supervised his practice, and took him to concerts, museums, and the opera. At 24 Arrau won the 1927 International Geneva Prize, and embarked on his legendary cyclical programs encompassing the complete sonatas of Beethoven, Mozart, Schubert and Weber, plus all of Bach s solo keyboard in twelve Berlin concerts. A triumphant 1941 Carnegie Hall recital launched Arrau s American career, and his international profile came into focus with numerous worldwide tours, honors, prizes and recording sessions that continued up until his death on June 9, 1991 in Mürzzuschlag, Austria.