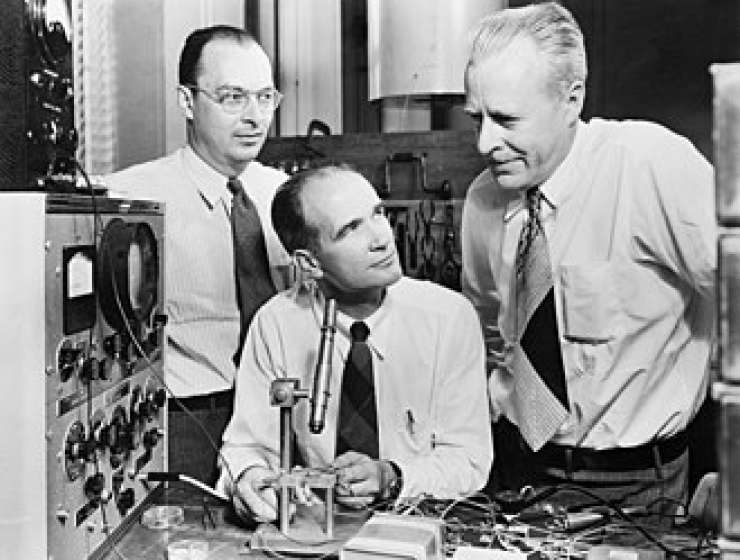 1
173
0
William Shockley and the Transistor
Physics

William Bradford Shockley, American physicist, shared the 1956 Nobel Prize in physics with 2 other American physicists, John Bardeen (1908-1991) and Walter H. Brattain (1902-1987) for “their researches on semiconductors and their discovery of the transistor effect.” This work ushered in the age of microminiature electronics. The transistor (transfer plus resistor, transferred current across a resistor) works as a semiconductor that transmits electricity in one direction only and functions as a rectifier in transforming alternating current to direct current. In electronics, the transistor has replaced the vacuum tube and has many applications in medical technology.

Shockley was born on February 13, 1910, in London, England. His father, a mining engineer, and his mother were in London on a business trip. Three years later, the family returned to the United States and settled in Palo Alto, California, where Shockley received his early education. He graduated from Hollywood High School in 1927, after which he attended the University of California at Los Angeles for 1 year. He transferred to the California Institute of Technology (Caltech at Pasadena), from which he received a BS degree with a major in physics in 1932. He then entered the Massachusetts Institute of Technology (MIT) in Cambridge, from which he received a PhD degree in physics in 1936. His doctoral thesis was “Calculations of Wave Function for Electrons in Sodium Chloride Crystals.” While at MIT, Shockley was a teaching fellow (1932-1936).

In 1936, Shockley became employed at the Bell Telephone Laboratories at Murray Hill, New Jersey, where he began the research that led to the invention and development of the transistor. He remained at Bell Telephone Laboratories from 1936 to 1955 as Director of the Transistor Physics Department, except for two brief visiting professorships—one at Princeton University, New Jersey, in 1946 and the other at Caltech from 1954 to 1955—and some years in government during World War II (1939-1945). From 1942 to 1944 he was research director of the Antisubmarine Warfare Operations Research Group set up by the US Navy Department of Columbia University, New York City, and from 1944 to 1945 he was a consultant to the Office of the Secretary of War.