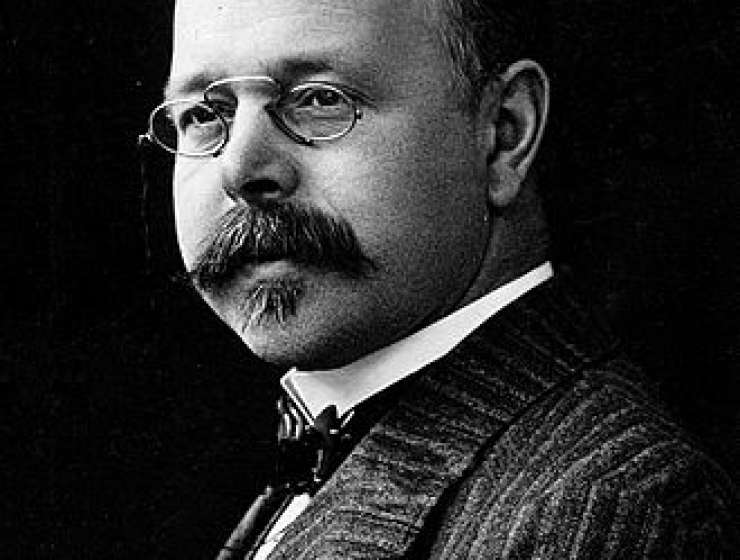 On June 25, 1864, German physicist Walther Hermann Nernst was born. One of the founders of modern physical chemistry he is best known for his theories behind the calculation of chemical affinity as embodied in the third law of thermodynamics, for which he won the 1920 Nobel Prize in chemistry. Nernst contributed to electrochemistry, thermodynamics and solid state physics. He is also known for developing the Nernst equation.

“No effect that requires more than 10 percent accuracy in measurement is worth investigating.”
— Walther Hermann Nernst

Nernst was born in Briesen in West Prussia (now Wąbrzeźno, Poland) to Gustav Nernst, a country judge, and Ottilie Nerger. Nernst had three older sisters and one younger brother. The third sister died of cholera. Nernst went to elementary school at Graudenz and went to study at the Universities of Zurich, Berlin and Graz. He began his studies in 1883 in Switzerland and moved on to Berlin in 1885. From 1886 he was able to deepen his physical interests with Ludwig Boltzmann.[4] Together with his assistant Albert von Ettingshausen, both soon discovered the Ettingshausen-Nernst effect, and Heinrich Streintz supported the mathematical discussion in Graz. Friedrich Kohlrausch offered him a doctoral position in Würzburg at the end of 1886 to further work on the topic, since the Graz University of Technology was not awarded the right to do his doctorate until 1902. In May 1887, Nernst graduated with a thesis on “Über die elektromotorischen Kräfte, welche durch den Magnetismus in von einem Wärmestrome durchflossenen Metallplatten geweckt werden“ (electromotive forces produced by magnetism in heated metal plates).