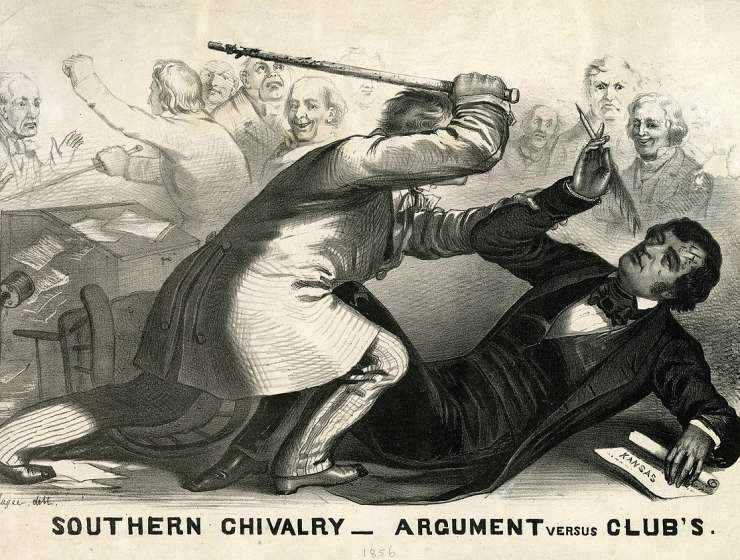 1
229
0
The Caning of Charles Sumner
Politics

Newspaper headlines shocked readers in late May 1856 with descriptions of a violent attack within the United States Capitol Building. Preston S. Brooks had nearly bludgeoned Charles Sumner to death. “Cowardly assault upon Senator Sumner,” declared the Hartford (Connecticut) Courant. The Edgefield (South Carolina) Advertiser simply referred to the incident as “Mr. Brooks’ chastisement of Senator Sumner,” while an Alabama newspaper opined, “Sumner has been needing something of the sort since the first day he put his foot into the Senate chamber.” The wide variety of reactions illustrated the growing sectional differences and foreshadowed the rising violence that culminated five years later with the outbreak of the American Civil War.

Early in his career, Massachusetts native Charles Sumner had sworn against a life in politics. That changed in 1848, when the Whig Party, with whom he identified, nominated Zachary Taylor for president. Taylor was a slaveholding southerner, and Sumner believed the Whigs had thus betrayed their strong base of support from northern abolitionists. He advocated for a schism and the establishment of a new party. The Free Soilers gathered momentum from disillusioned northerners, and the party rewarded Sumner with an endorsement for United States Senate.

Once in Congress, Sumner campaigned to rectify his issues with the Compromise of 1850 and Fugitive Slave Act. He also opposed the passage of the Kansas-Nebraska Act in 1854, which amended prior compromises to allow territories to decide issues for themselves when they applied for statehood. The legislation seemed democratic, but Sumner predicted that outside agents would influence Kansas’s future, particularly with the growing issue of slavery. Indeed, the region became a battleground in 1856 as forces opposing and supporting slavery clashed for control. Sumner blamed this violence on Congress and gathered his thoughts into a passionate address, “The Crime Against Kansas,” that took two days to deliver.

Story Continues
battlefields.org
What Do You Think Of That Genius?