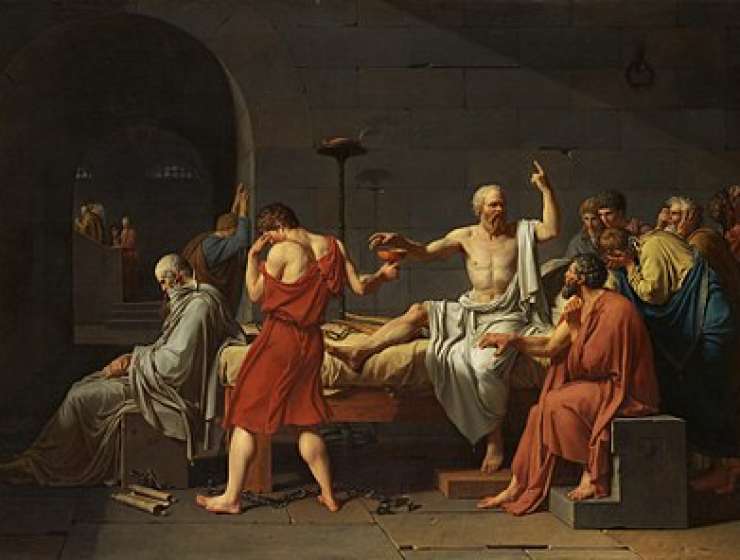 Two thousand four hundred years ago, one man tried to discover the meaning of life. His search was so radical, charismatic and counterintuitive that he become famous throughout the Mediterranean. Men – particularly young men – flocked to hear him speak. Some were inspired to imitate his ascetic habits. They wore their hair long, their feet bare, their cloaks torn. He charmed a city; soldiers, prostitutes, merchants, aristocrats – all would come to listen. As Cicero eloquently put it, "He brought philosophy down from the skies."

For close on half a century this man was allowed to philosophise unhindered on the streets of his hometown. But then things started to turn ugly. His glittering city-state suffered horribly in foreign and civil wars. The economy crashed; year in, year out, men came home dead; the population starved; the political landscape was turned upside down. And suddenly the philosopher's bright ideas, his eternal questions, his eccentric ways, started to jar. And so, on a spring morning in 399BC, the first democratic court in the story of mankind summoned the 70-year-old philosopher to the dock on two charges: disrespecting the city's traditional gods and corrupting the young. The accused was found guilty. His punishment: state-sponsored suicide, courtesy of a measure of hemlock poison in his prison cell.

The man was Socrates, the philosopher from ancient Athens and arguably the true father of western thought. Not bad, given his humble origins. The son of a stonemason, born around 469BC, Socrates was famously odd. In a city that made a cult of physical beauty (an exquisite face was thought to reveal an inner nobility of spirit) the philosopher was disturbingly ugly. Socrates had a pot-belly, a weird walk, swivelling eyes and hairy hands. As he grew up in a suburb of Athens, the city seethed with creativity – he witnessed the Greek miracle at first-hand. But when poverty-striken Socrates (he taught in the streets for free) strode through the city's central marketplace, he would harrumph provocatively, "How many things I don't need!"