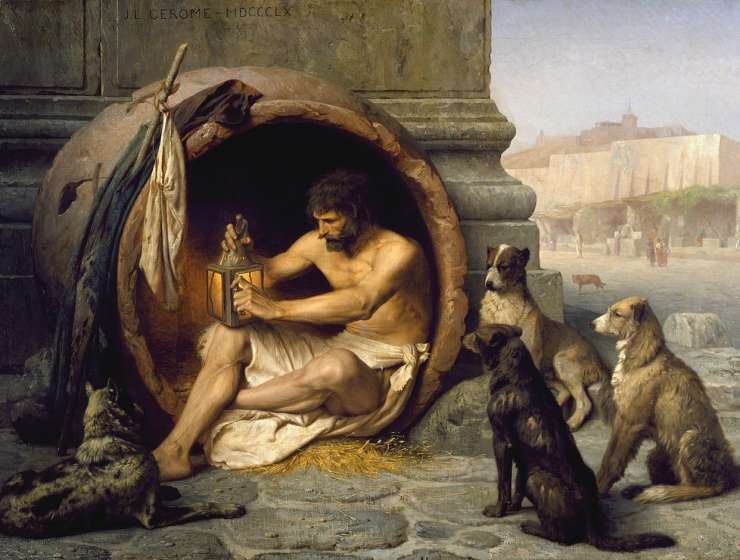 1
205
0
Nietzsche and the Cynics
philosophy

Ancient Cynicism was an eccentric model for practising a philosophical life. Diogenes of Sinope (c404-323 BCE) and his followers claimed independence from conventional material desires and the normal turmoil of emotional life. They were notoriously without shame – pissing and satisfying their sexual needs in public, like the dogs (kynes) from which their name partly derived.

Diogenes himself was said to have slept in a tub or a shack in the Athenian marketplace. Seeing a youth scoop up water in the hollow of his hand, he threw away the wooden cup he had been using, pleased to see that he did not need it. When Alexander the Great announced himself: ‘I am Alexander the great king,’ Diogenes replied: ‘I am Diogenes the dog.’

For Friedrich Nietzsche – steeped in the Classics – the Cynics, and the much later account of them in the gossipy collection of anecdotes The Lives and Opinions of Eminent Philosophers by Diogenes Laertius (no relation to Diogenes of Sinope), were attractive material long before he parted company with an academic career to practise a more abrasive public philosophy of his own. ‘Diogenes Laertiades’ was how Nietzsche signed himself in a letter to a friend in his late 20s: ‘son of Laertius’, or literally ‘sprung from Laertius’, ie from Diogenes Laertius. In the wake of a great deal of critical work in recent years, excavating Nietzsche’s Cynicism, two questions are worth asking afresh: how far did the identification go? And what did his philosophy hope to gain, and risk losing, by it?

Story Continues
aeon.co
What Do You Think Of That Genius?