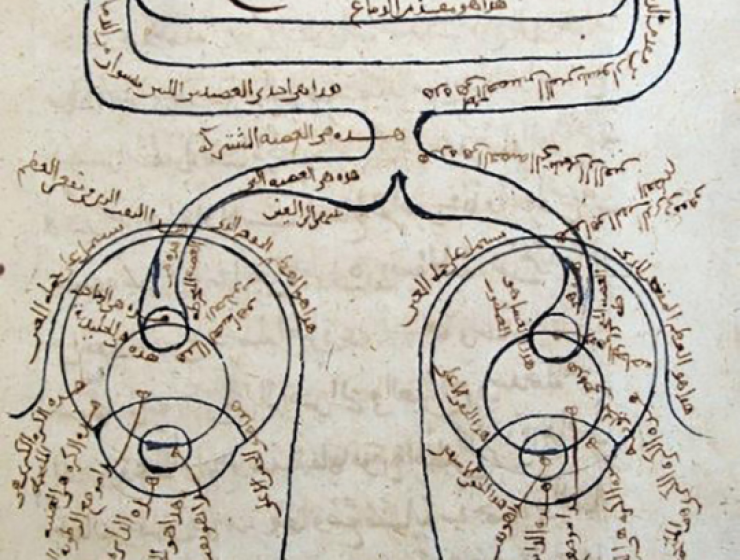 When UNESCO declared 2015 the ‘International Year of Light and Light-Based Technologies’, across the world a calendar filled with symposia and high-profile educational campaigns was inaugurated on the history of light-based discoveries, the ways in which our contemporary societies use it as a resource and will employ it in the future. UNESCO, however, chose the year 2015 as it supposedly marks the 1000th anniversary of the publication of a book, which like no other work of the medieval period, impacted for many centuries to come how pre-modern societies in the Middle East and Europe would think of the medium of light and vision. In the centre of the celebrations connected to the International Year of Light stood the medieval Muslim polymath Abu al-Hasan ibn al-Hasan ibn al-Haytham al-Basri al-Misri – known as Alhacen or Alhazen (a transliteration of ‘al-Hasan’) in the West – and his best known work, the Kitab al-Manazir, usually translated as the ‘The Book on Optics’.

Ibn al-Haytham appears to have written an autobiography towards the end of his life, which unfortunately, as with so many sources from this period, is lost to us. What we know of it has been discovered only in the form of brief quotations and anecdotes, embedded in a number of mostly late-medieval biographical dictionaries. None of these sources makes the effort to draw a detailed picture of one of the most remarkable thinkers and scientists of the early medieval Islamic world. From these scraps, however, it is possible to reconstruct the main events of Ibn al-Haytham’s life, which took him from al-Basra in Iraq where he was born in 965 CE, eventually to Cairo in Egypt, where he died around the year 1040 CE.

Story Continues
aspetar.com
What Do You Think Of That Genius?