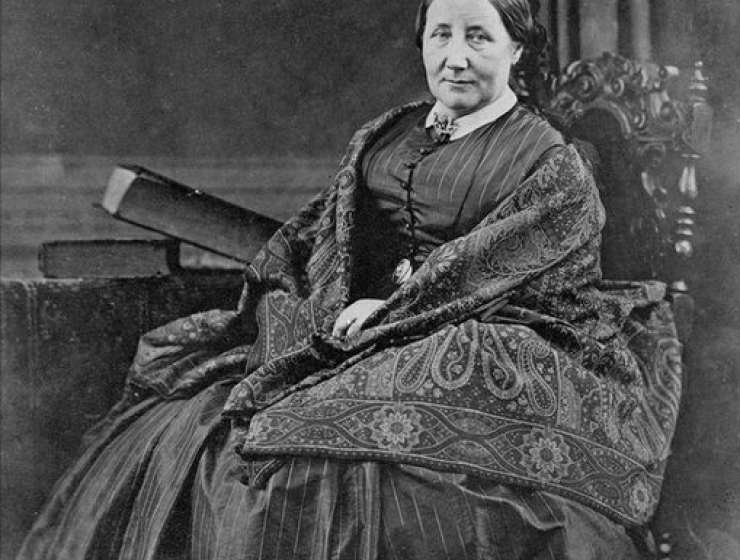 As the Victorian novel was in full swing, Elisabeth Gaskell depicted social panoramas which testified to her knowledge of both the industrial North and the rural South of England, paving the way for the demands of feminist movements and the Suffragettes.

Elisabeth Cleghorn Gaskell was a British novelist. She was born in 1810 in London and died in 1865. Taken in by an aunt after her mother died when she was still a child, Elisabeth spent her childhood at Knutsford, in Cheshire, a town which she used as a background for her novel Cranford (1853). She studied Latin, French and Italian at the school of the Byerley Sisters in Barford, and then in Stratford-on-Avon in 1824, before she returned to live with her father in London, where he was Keeper of the Treasury Records. He remarried in 1814. Upon the death of her father in 1829, she returned to Knutsford. During a visit to Manchester she met William Gaskell, minister and teacher.  They got married and settled in this dark and smoky industrial town in the North of England, which inspired the background for her novels Mary Barton (1848) and North and South (1854). Leading an active life as wife and mother, Elisabeth became really involved in writing. She published her first novel Mary Barton anonymously.

It was a mixture of a love story and a detective story, rooted in the conflicts between the mill workers and their superiors. Following her instant literary success, Charles Dickens invited her to write for his weekly magazine Household Words, where she published Cranford, the chronicle of a small English town, in the form of short sketches, depicted with humour. Shortly after followed North and South, with a social dimension, and after that Wives and Daughters (1864-1866), a great novel published monthly in 18 instalments in the Cornhill Magazine, and finally Cousin Phyllis (1864), half-way between a novel and a short story. She was also known for her gothic-style ghost stories, published in Charles Dickens’s magazine, along with other great authors such as Wilkie Collins.

Story Continues
gallica.bnf.fr
What Do You Think Of That Genius?