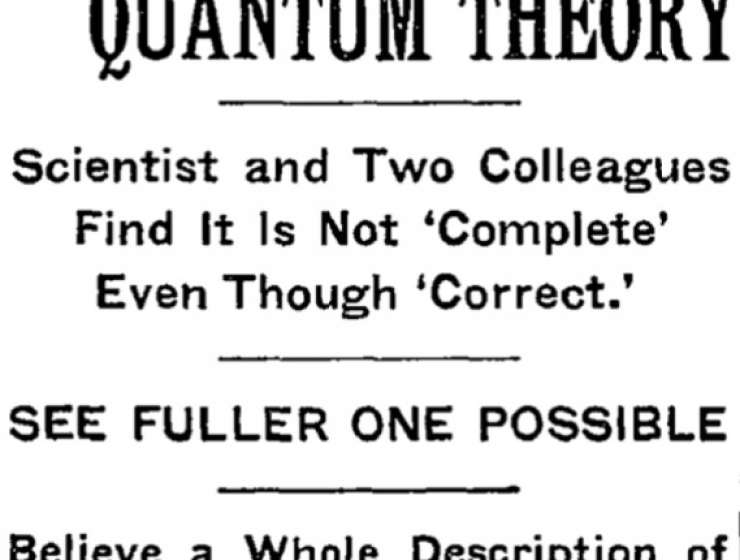 1
417
0
Einstein, Bohr and the war over quantum theory
Physics

Ramin Skibba explores a history of unresolved questions beyond the Copenhagen interpretation.

All hell broke loose in physics some 90 years ago. Quantum theory emerged — partly in heated clashes between Albert Einstein and Niels Bohr. It posed a challenge to the very nature of science, and arguably continues to do so, by severely straining the relationship between theory and the nature of reality. Adam Becker, a science writer and astrophysicist, explores this tangled tale in What Is Real?.

Becker questions the hegemony of the Copenhagen interpretation of quantum mechanics. Propounded by Bohr and Werner Heisenberg in the 1920s, this theory holds that physical systems have only probabilities, rather than specific properties, until they’re measured. Becker argues that trying to parse how this interpretation reflects the world we live in is an exercise in opacity. Showing that the evolution of science is affected by historical events — including sociological, cultural, political and economic factors — he explores alternative explanations. Had events played out differently in the 1920s, he asserts, our view of physics might be very different.

Becker lingers on the 1927 Solvay Conference in Brussels, where 29 brilliant scientists gathered to discuss the fledgling quantum theory. Here, the disagreements between Bohr, Einstein and others, including Erwin Schrödinger and Louis de Broglie, came to a head. Whereas Bohr proposed that entities (such as electrons) had only probabilities if they weren’t observed, Einstein argued that they had independent reality, prompting his famous claim that “God does not play dice”. Years later, he added a gloss: “What we call science has the sole purpose of determining what is.” Suddenly, scientific realism — the idea that confirmed scientific theories roughly reflect reality — was at stake.