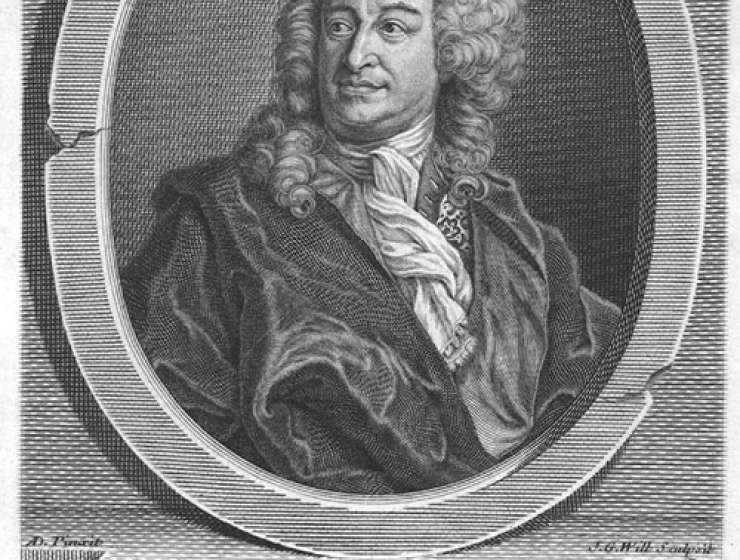 On January 24, 1679, German philosopher Christian Wolff was born. One of the most important philosophers of the Enlightenment between Leibniz and Kant, he is one of the most important representatives of natural law and is regarded as the actual founder of 19th-century jurisprudence on concepts. German philosophy owes its terminological foundation to him; many of the terms he defined, such as consciousness, meaning, or attention, were later adopted into everyday language.

“Ein Mensch ist verbunden, dem anderen mit seinem Vermögen, seiner Arbeit, seiner Hülfe und seinem Exempel vielfältig zu dienen.”
(A person is connected to serve the other person with his ability, his work, his help and his example in many ways.)
– Christian Wolff

Christian Wolff, the son of a tanner, was born in Breslau, today’s Wrocław in Poland, a Silesian city with a  biconfessional (both Lutheran-Protestant and Catholic) character, then under Austrian administration. At the age of eight Christian Wolff, himself a Lutheran, came to the Maria Magdalenen Gymnasium in Wroclaw. According to his own statements he also followed the Catholic services and discussed philosophical and theological questions with the Wroclaw Jesuit pupils. To his father, who attended the Elizabethanum in Wroclaw up to the Prima, but then took up the above-mentioned trade because of his poverty, he owed a careful education and early instruction, which he himself showed great eagerness to learn. The headmaster of the grammar school at that time was Christian Gryphius, a son of the baroque poet Andreas Gryphius from Glogau. One of his most important teachers was Caspar Neumann, who strongly influenced his career, not only because of his thoroughness, but also because of his sermons, which, according to the inclination of the time, were dogmatic in character, and because of his admonition to philosophy.[1] From 1699 Wolff studied theology in Jena, but above all physics and mathematics.