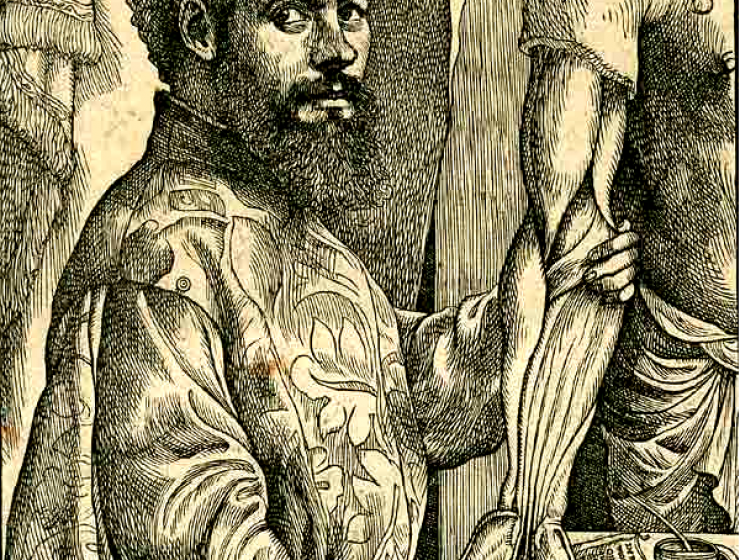 Andreas van Wesel (Figure 1) was born on December 31st, 1514, in Brussels, which was a city of the Duchy of Brabant (the southern portion of Belgium) and the Holy Roman Empire. His surname meant ‘weasel’ and his family's coat of arms, as depicted in Vesalius’ masterpiece (Vesalius 1543a), represented three weasels (Figure 2). He came from a family of renowned physicians and pharmacists; both his father (pharmacist) and grandfather (physician) served the Holy Roman Emperor (for a comprehensive biography of Vesalius, see Cushing 1962). In 1529, he left Brussels to study at the Catholic University of Leuven (Figure 3), where he embarked on the arts courses. As wealthy young man of his time, Vesalius studied rhetoric, philosophy and logic in Latin, Classical Greek, and Hebrew at the Collegium Trilingue. While still in Leuven, Vesalius’ interest focused on medicine. To pursue his medical education, he moved to France from 1533 to 1536 where he studied at the University of Paris.

Paris had long been the leading medical school north of the Alps. Teaching took the form of lectures on particular texts in Latin, especially Hippocrates, Galen, Avicenna, and Rhazes. At that time, Paris was embracing the Humanistic intellectual movement, which was established almost two centuries previously by Petrarch (1304–1374) in northern Italy and in Padua in particular. As part of Humanism, many classical books and manuscripts were being retranslated ad fontes, i.e., from the original source. Trained in classical languages, Vesalius was strongly influenced by the humanist faculty members in Paris and their retranslations of Galen. However, practical instruction was rare in Paris. Anatomical dissection was a relatively recent and infrequent exercise. Anatomy was primarily learned from a book, especially the Introduction to Anatomy of Mondino de’ Liuzzi (1270–1326), a Bolognese professor who had lived and taught two centuries earlier, and whose anatomy was based on Galen's work (first edition: Mondino 1475/1476).